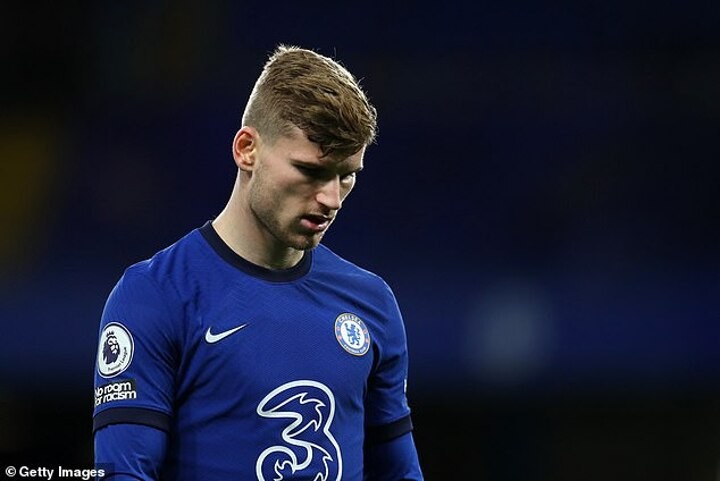 Craven Cottage and Stamford Bridge are less than two miles apart but the clubs are a world away in their goals for this season.

Fulham’s Scott Parker and Chelsea’s Frank Lampard have very different objectives. One is fighting to keep his club in the Premier League, the other wants to win it — or finish in the top four at the very least.

Parker and Lampard are old adversaries and former colleagues who I’m delighted to see now coaching in the Premier League — because I like seeing top players try to become top managers — with the same passion they showed in their playing days.

When we last looked at Chelsea in this column in November, the pieces of the jigsaw seemed to be coming together, but the picture became distorted by a poor run of results. Players must be fielded in their natural positions, first and foremost.

By playing Timo Werner central for Chelsea’s last two games, Lampard is doing that. Werner has spent most of this season on the left wing. Out there, he doesn’t test full backs the way someone such as Callum Hudson-Odoi or Christian Pulisic does, with direct running and a desire to burst beyond the opponent.

The 24-year-old German is a centre forward who is more interested in putting his blistering pace to use by chasing balls over the top.

You wouldn’t use Jamie Vardy on the wing, so why should it be different for Werner? The rapid former RB Leipzig striker went 12 games without a goal, but back in his favoured position in the FA Cup, he ended that drought.

Werner ranks in the Premier League’s top 10 players for shots taken, but his conversion rate is one of the worst. With him back to being used centrally — as he was against Manchester City and Morecambe — I fully expect him to fulfil his potential.

I rewatched Arsenal’s 3-1 Boxing Day win over Chelsea closely this week. Lampard substituted Werner at half-time and accused his players of lacking ‘energy and desire’ after that defeat.

Watching Chelsea in those first 20 minutes, I felt they were very good at containing Arsenal but weren’t able to pinch the ball high up the pitch. Their 4-3-3 system makes it difficult for a midfielder to make up the distance and join the front three in the high press.

At times Chelsea winger Pulisic was leaving Arsenal full back Kieran Tierney to press centre back Pablo Mari. That allowed Tierney to charge down the left, with colleague Gabriel Martinelli giving Reece James the nightmare of a two-v-one situation.

If, instead, Chelsea had played a 4-2-3-1 with someone in the No 10 position, it would have allowed a player to man-mark Arsenal’s deep-lying playmaker. Then, when the moment was right, he could have pressed the centre backs with Tammy Abraham.

This would also mean Pulisic could have maintained his position, giving the team a better shape and restricting the freedom of Tierney, who was the man behind Arsenal’s first goal.

When chasing down a centre back, Abraham was getting his angle of approach wrong. The striker wasn’t fixing the play to one side of the pitch by blocking the pass to the other centre back.

Chelsea can be good at containing teams in their own half, but only rank eighth in the Premier League for possession won in the final third.

With small tweaks to the system, they can win the ball back higher up the pitch more often.

Lampard has largely relied on 4-3-3 this season, switching to that formation after back-to-back 0-0 draws against Sevilla and Manchester United using 4-2-3-1 and 3-4-2-1 respectively in October.

The 42-year-old is a good coach who deserves to be given time to perfect his system. Already this season eight sides have sat top of the Premier League table — the joint-most in a single campaign.

It’s so open. A win on Saturday is a must if Chelsea want to make it into the top four this season.

Fulham endured a disastrous start to the season with four straight defeats, including a 3-0 loss to Aston Villa which saw co-owner Tony Khan apologise to fans and criticise the effort.

Parker took issue with that publicly and it looked like the Fulham boss might be on borrowed time. But instead it galvanised the club and they went to work on bringing in players.

Fulham signed six loanees in the summer, and five of those featured in Wednesday’s 1-1 draw at Tottenham. Goalkeeper Alphonse Areola is borrowed from PSG, Ola Aina from Torino, Joachim Andersen from Lyon and Ruben Loftus-Cheek from Chelsea.

Tosin Adarabioyo was signed from Manchester City and his £2million fee is looking a snip.

Kenny Tete played in last year’s Champions League semi-final for Lyon and suits the right wing back role. As does Antonee Robinson at left wing back.

Parker has created a togetherness which can be difficult to achieve when so many of your players belong to other clubs.

Fulham lost to Everton using 4-2-3-1 in November and that was the last time they used that formation. Carlo Ancelotti’s side played with three at the back that day. Since then, Fulham have done the same and lost only once in seven Premier League matches — at Manchester City.

Fulham previously looked as good as down. But with clever business in the transfer market, good work on the training pitch and an unbeaten run in the Premier League, Parker has given his club a fighting chance.

Today’s match will make for a fascinating watch.

Can Lampard get Chelsea back on track towards the top four? Or will Parker continue to build the tunnel for Fulham’s great escape?