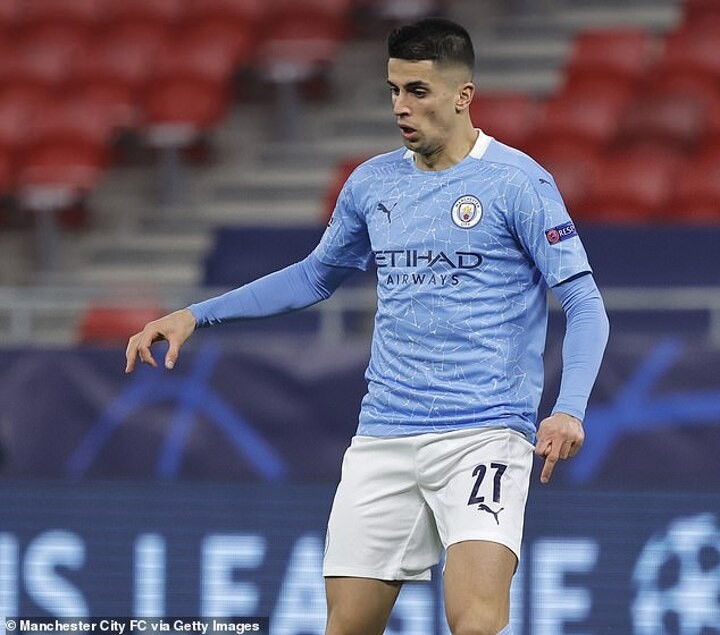 This Manchester City team are so unconventional in the way they are set up to attack.

Players are in positions in name only. They have a 'fake' No 9 who drops deep and drifts through the team to receive the ball.

They have 'fake' midfielders in Ilkay Gundogan and Bernardo Silva who push up into the centre forward positions and 'fake' full backs — primarily Joao Cancelo, but sometimes both — who move into midfield.

It's a system designed to outnumber the opposition in key areas of the pitch. It's 'now you see me, now you don't' for opponents.

City beat Borussia Monchengladbach 2-0 in the Champions League and it says a lot about Pep Guardiola's mentality that he was disappointed they did not win by a bigger margin.

David Moyes has had a week to prepare West Ham's players for Saturday's game. Moyes is not averse to making special plans for special players. Against Aston Villa, he played two right backs — Vladimir Coufal and Ryan Fredericks — to tie down Jack Grealish and it worked a treat.

The problem on Saturday is that City have so many special players! Watching them against Monchengladbach, Moyes will have noticed how right-footed left back Cancelo was moving into midfield seamlessly.

This is what happens when you don't press high against City.

Arsenal neglected to do that last weekend and could have been 3-0 down inside five minutes.

If you don't press high, you let City play in their way and it becomes a very long 90 minutes. Both of the goals against Borussia came as a result of Cancelo's delivery into the box.

That is a major strength of City's but one Moyes could turn into a weakness on Saturday. West Ham cannot simply sit back and admire this magnificent City machine who rotate their positions and dominate possession. They have to relish the challenge and believe they can be the ones to deny them a 20th consecutive win.

It is likely that Moyes will have his side sit deep on Saturday, given how successful they've been at doing that. He's got a solid defence, plus Tomas Soucek and Declan Rice in front. With those two providing protection, there is every reason to expect there will be times when West Ham win the ball back.

Soucek is a battler — nobody has won more aerial balls than him this season. Rice is one of the top tacklers and interceptors in the Premier League, too. When West Ham win the ball, the first couple of passes they make are incredibly important.

Cancelo's positioning is so unconventional and it is impossible to be in midfield and covering full back at the same time. That will be the area to aim for.

If possible, West Ham must place accurate passes into the channel for their willing runners — like Michail Antonio, Jesse Lingard, Jarrod Bowen or Said Benrahma — to chase. Those forwards have to spy that space and be ready to break into it immediately.

Even then, it won't be easy to score, given they will have to beat goalkeeper Ederson, who is in fine form. But that is how West Ham can look to hurt City.

This is a meeting between two contenders for the Manager of the Year award.

Moyes has done an outstanding job and it is surely a formality that the West Ham board reward him with a long-term deal.

His savvy in the transfer market stands out. Moyes refused to pay Burnley £50million for James Tarkowski and instead turned to Craig Dawson on loan from Watford.

You could say Dawson, playing alongside Angelo Ogbonna and Issa Diop, has been as important to West Ham recently as £65m Ruben Dias has to City. Aaron Cresswell at left back is one of the Premier League's best crossers of the ball, while Coufal is wonderfully aggressive at right back.

Moyes will back his defence, along with Soucek and Rice in front of them, to do a job on City — but this is the ultimate test for any team and manager.

Guardiola's City are the great innovators and they can leave you in a spin. West Ham will need to be smart if they are to get a positive result at the Etihad Stadium on Saturday.