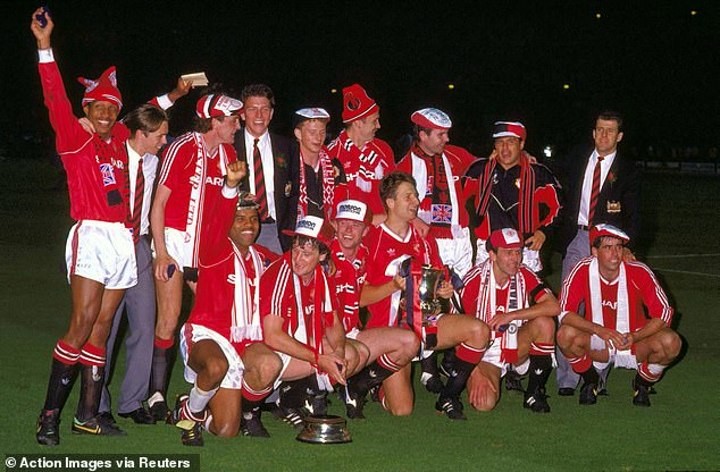 June 30, 1999 is regarded by many as the day the FA Cup died. It was then a joint statement from the Football Association and Manchester United confirmed the holders would not defend their trophy the following season.

It was the right decision, but for the wrong reasons.

The FA were terrified that if United refused to participate in a revamped FIFA Club World Cup in Brazil that January, this would affect England’s bid to host the World Cup in 2006. The mission was doomed anyway, as we now know and so was that particular format for the Club World Cup.

Yet the FA Cup endures, despite the constant questioning of its relevance. This summer, however, there is a very real chance of losing it. What the FA does with its marquee tournament in the coming weeks will quite probably shape its longer-term fate.

If the FA Cup becomes the only major competition in English football that does not attempt to complete its season, what chance does it have of continued relevance?

If the FA Cup is allowed to simply slip away unmourned, squeezed out in the desire to finish the league season and European competition, then it is over.

How can we ever judge a manager or club that spurns it again? How can it be afforded respect, its place in the calendar, when its existence plainly does not matter? What the FA does with the FA Cup this summer is absolutely crucial.

The FA’s creeping and crawling around FIFA’s cabal of crooks was little short of sickening even at the time, but beyond that there was a genuine case for Manchester United’s withdrawal.

While the Club World Cup continues to be held in Europe’s mid-winter it presents a huge problem for a country with a 20-team league and two domestic cup competitions. That hasn’t changed across two decades, really. Liverpool were every bit as compromised in 2019 as United would have been in 2000 — as demonstrated by their Carabao Cup quarter-final decision.

Once the Club World Cup expanded — in effect replacing a one-off showpiece match between the champions of Europe and South America — it was always going to place pressure on any English qualifier.

So even without the clumsy politicking, it was reasonable that United be offered the opportunity to avoid an overwhelming schedule in 1999-2000.

Indeed, had the possibility been spotted earlier, the FA could have made it a rule — that any club qualifying for this prestigious new event could be given the option of withdrawing from one domestic cup competition to facilitate their progress. What would be the downside in English football aiming to have the current world champions?

Still, no one spotted it, no one prepared for it, and once Manchester United won the 1998-99 Champions League, there was an inevitable row over priorities, amplified by the FA behaving like Uriah Heep around FIFA.

Yet United’s decision still isn’t the reason for the FA Cup’s decline — as if one club missing one season could destroy a competition with such incredible history.

In fact, a list of FA Cup winners since United withdrew suggests there is no struggle getting the elite to treat the competition seriously. Chelsea and Arsenal have won it six times each, Manchester United, Liverpool and Manchester City twice each, with Portsmouth and Wigan the only victors from outside the big six. And Leicester have won the Premier League in that time, too.

More than an individual absence, easily explained and justified, the decline of the FA Cup relates to the wealth available in the Premier League and Champions League, making fourth a more financially rewarding achievement than domestic trophy success and survival more appealing than a day out at Wembley.

Deciding not to finish the FA Cup at all, however, is another matter entirely. If not one club but all eight quarter-finalists reject the FA Cup, where is it next season?

Equally, what is the purpose if — as is being reported — the small clubs are cut loose in 2020-21, with those beyond the sixth tier of the pyramid excluded?

This season, 739 clubs entered the preliminary rounds, beginning in August. Yet there are suggestions it will only be possible to play from what would have been the fourth qualifying round next year, leaving the four professional leagues, plus three National Leagues as the only entrants.

Again, the reputational damage would be significant. The matches that capture imaginations every year are those that feature not just underdogs, but teams that may never pass this way again.

The first round proper in 2019 included Maldon and Tiptree and Chichester City from tier eight, plus Stourbridge, Nantwich Town, Carshalton Athletic, Kingstonian and Hayes and Yeading, all from outside the National Leagues.

And while none made it as far as round three when the top 44 clubs enter, the fact that they might — and the prospect that Manchester United could then be dragged down to the Wallace Binder Ground in east Essex — is what makes the FA Cup such an exceptional prize.

Now the pyramid is fluid, more than half of the National League clubs have been in the Football League at some stage anyway. Non-League does not carry the same meaning.

So, while football may be resting right now, this is no time for the FA to go to sleep. It is obvious that the Premier League’s conclusion is a priority, it is obvious that for the handful of clubs still meaningfully involved in Europe — Manchester City, Manchester United and Wolves — those ties are important.

But in the coming weeks a plan must be formulated to afford the FA Cup its rightful role in football’s improvised calendar.

And if the governing body cannot do this, if they cannot at least fight for their competition, make a claim for its integrity and worth, then what is the point in any of it?

Deniz Aytekin, a Bundesliga referee, says that he has felt less intensity in the games behind closed doors.

Aytekin’s pulse rates have been lower and he suffered an absence of emotion. That is understandable. Maybe players feel similarly before the games begin.

What follows, however, suggests detachment is quickly dispelled when the action starts and Borussia Dortmund’s results in particular indicate their players are very much engaged.

One imagines pulse rates will not be an issue when the whistle blows.

Wenger sees FPP for racket it really is

According to Tony Pulis, there was a time when Arsene Wenger wanted long throws banned.

It was in those years when Arsenal couldn’t win at Stoke, during Rory Delap’s time at the club, with his famously enormous, flat delivery. Arsenal frequently struggled under the pressure of Pulis’s direct approach.

So Wenger’s view on touchline restarts was entirely selfish. His reputation, ‘The Professor of Football’, belies the fact that, on many occasions, his take on any subject was not the result of study, but wholly self-serving. It really should be no surprise, then, to discover that, freed from the need to beat Chelsea and Manchester City, the man who coined the phrase ‘financial doping’ sees FFP for the protectionist garbage it is.

Wenger’s term for what in any other industry is called investment was a very powerful weapon in the philosophical debate around club ownership and funding.

He first used it in 2005, when Chelsea won the league, and it became a mantra once Manchester City attracted rich owners too, and entered the market for disgruntled Arsenal players.

Frequently, when Wenger made his attacks, his intellectual background in economics was referenced. Rarely was it suggested that the source of his concern was the threat new money posed to Arsenal’s cosy residence among the elite. Out of football’s front line for more than two years now, however, Wenger has produced a rather astonishing U-turn. Even by the standards of, say, this duplicitous Government, it is quite the reverse. Even if it emerged that a coronavirus-stricken Boris Johnson had accompanied Dominic Cummings on his journey north, coughing into his hands and ruffling the hair of every small child he passed, it wouldn’t quite surpass the 180 degree handbrake spin Wenger has performed on FFP.

‘I am in favour of opening things up to more investment, which FFP does not allow for,’ he told L’Equipe. ‘The clubs that dominate Europe today are those that were built and made investments during an era when FFP did not exist. FFP prevents emerging clubs who want to invest from doing so. That is not normal.

‘These rules have fixed a hierarchy, the big historical clubs are bigger and bigger and, obviously, they are all fighting for FFP to be scrupulously applied to others so that competitors can’t come through.

‘Controlling club management rigorously, yes, verifying where funds are coming from, yes, but we need to encourage people to invest in football. FFP must become more flexible and facilitate investment. We must control clubs in their way of doing things but not tell them how to do it. If the club believes that it is not taking any risks with its balance by buying a player for £150million, what is the problem?’

‘WTFF?’ as they might be saying at Manchester City right now. For while it is nice for Le Professeur to join the ranks of the enlightened, regular readers may spot that some of us have been saying precisely this for two decades now, throughout the time Wenger’s thoughts were driving stories with headlines such as: ‘Arsene Wenger wants FFP villains like Manchester City out of Champions League.’

And he got his way, too. City are currently tied up in a Court of Arbitration case over precisely that punishment as a result of the very rules Wenger championed and now acknowledges are hideously skewed towards an established elite.

So what has changed? Only that it is no longer Wenger’s mission to beat Chelsea and Manchester City so, impartial, he can see FFP’s very obvious flaws.

Meaning, previously, he didn’t actually think about it, about the wider implications of protectionist rules, about fair finance within football.

He wasn’t a professor, far less an economic intellect — just a football manager with a grudge, and all the logical sophistication needed to deliver a Delap thrown-in.

A powerful group of formers got together this week, with a plan to save football. There was Damian Collins, former chairman of the Digital, Culture, Media and Sport select committee, Charlie Methven, a former member of the board at Sunderland — he is still a director of its holding company, Madrox Partners — and Lord Triesman, former chairman of the FA.

The thing with formers is they tend to hold that status for a reason. Their big idea could provide a clue: they want to get the Government in.

The plan is for a Football Finance Authority to distribute a Government relief fund for struggling lower-league clubs and then, more ominously, to monitor club finances in the longer term. It doesn’t say who would be qualified to do this but, seeing as it would be a Government project, don’t rule out Alex Scott. So this is the future of football? Clubs turned into glorified quangos, civil servants deciding who can be bought and sold, institutions that have endured through centuries going cap in hand for Whitehall approval. Triesman always thought he was too smart for sweaty old football, while Collins was frequently on hand to bayonet the wounded and pontificate when trouble struck, so it’s no surprise their grand idea is to put formers and politicians in charge.

And nobody would argue Football League clubs have demonstrated best business practice in the run-up to this crisis. Then again, the jury is very much out on our political class, too, as you may have noticed.

It is hugely patronising that neutral venues are not off the table for the biggest games after the restart. Liverpool’s early matches, local derbies, even Wolves versus Sheffield United may yet be moved to prevent crowds congregating. The presumption is that football fans are as reckless and unruly as the Government and its advisers. What cheek.