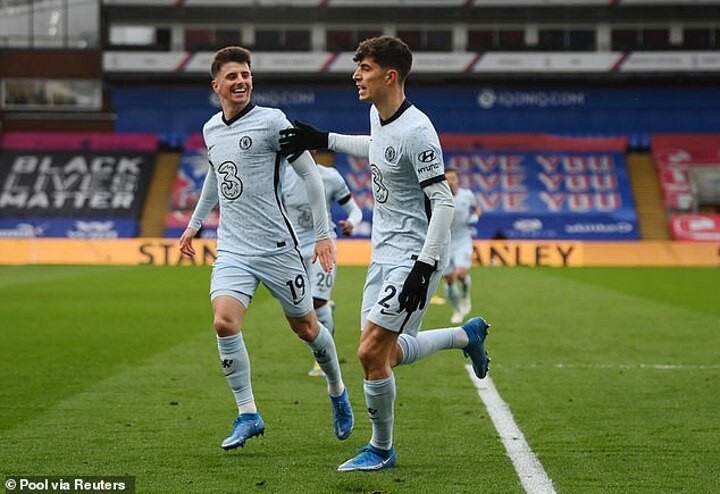 Mason Mount is excited by the prospect of combining with Kai Havertz and Christian Pulisic in Chelsea's front three again after the trio wreaked havoc against Crystal Palace.

The England star was man of the match at Selhurst Park while both Pulisic and Havertz were on the scoresheet as Thomas Tuchel potentially found his most potent combination in attack.

It was the first time since Tuchel replaced Frank Lampard as manager that Chelsea had scored more than two goals in a match.

Havertz, who finally showed his class in blue colours as a false No 9, opened the scoring before Pulisic, stationed alongside Mount as a playmaker, netted twice.

Mount, speaking ahead of Chelsea's return leg against Porto in the Champions League on Tuesday night, was certainly impressed.

'I don't think it has come together like that since our first game together,' he told Chelsea's official website.

'It was always coming; it was always brewing. We started off very sharp. At the top of the pitch our combinations were good, we were creating chances and we took them.

'That's something we probably haven't been doing as much recently.

'We know we have a lot of quality in the team. When we're on it and we're creating chances we can score a lot of goals. It hadn't happened like that but it has now and that's great for us.

'We came into the game with a lot of confidence after Porto, knowing what we can do.

'As a team we felt very strong. We know what is on the line. We're still in three competitions so every game is so important.'

Having seen off Palace, Chelsea are strong favourites to make it through to the Champions League semi-finals as they take a two-goal lead into the second leg with Porto.

Mount scored an excellent goal in the first leg win before Ben Chilwell added a late second in Seville to put Tuchel's side in a strong position.

Havertz, a £62million signing last summer, has been criticised for his form at times but certainly showed his class against Palace, scoring his first goal since January.

'We all know what he has got in his locker,' Mount added.

'Him in the box is very dangerous. He opened up on his left and tucked it into the far corner, and that's what we see in training. It was a brilliant finish and I'm very happy for him.'