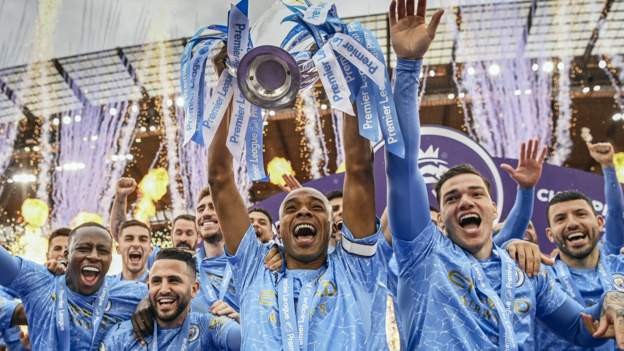 Premier League chief Richard Masters has told the BBC the league "supports the principle of an independent regulator", but warned "we need to be careful of unintended consequences".

The government have backed a proposed new body to oversee the English game.

"It's a key part of the recommendation, government-backed, and to push back would be wrong," said Masters in his first public comments on the plan.

The Premier League had previously objected to an independent regulator.

But significantly, it has now shifted position.

"We are open to an independent regulator and we want to discuss details with government going forward," Masters told BBC sports editor Dan Roan.

"We have to be careful not to damage the Premier League and English football. We agree with the thrust, but there are some pretty radical proposals there that need to be thought about."

He added: "What we need to be careful of is unintended consequences.

"It is a seismic change in the way football is going to be governed but we need to make sure we preserve some of the good things, the great successes and strengths of English football, which are driven off external investment and the ability of clubs to compete on the pitch.

"These reforms need to preserve all of that."

Government backs independent regulator for English gameListen: Will greater regulation strengthen English football or damage its global appeal?Fan-led review - what is being recommended?

Former sports minister Tracey Crouch, the chair of a fan-led review into English football, said the game needs an independent regulator to stop it "lurching from crisis to crisis".

The report made 47 recommendations, including clubs having a 'shadow board' of fans so they are properly consulted on key decisions and that supporters hold a 'golden share' to protect their clubs' heritage and which competitions they play in.

"There is lots in the review and the devil is in the detail," said Masters. "Giving fans a greater voice, allowing them to have a bigger say in some of those important heritage issues that Tracey has identified as important, and we shouldn't resist all of that.

"In fact, some of our clubs have already adopted what I would describe as shadow boards.

"Last week Norwich brought forward to change their crest, they did so in huge consultation with their supporter base. So, I think those sorts of things can work as long as they are carefully described in the final policies."

However, Masters said Crouch's controversial recommendation of a Premier League transfer levy to raise more funds for the rest of the game was "too radical".

"There is already a levy of 4% on domestic transfers, 5% for international, for player welfare and youth development across the pyramid. 10% on top of that is too radical," Masters added.

"Will it have an impact on the Premier League and Championship's ability to secure the best talent and put on the best show to keep the virtuous circle going?"

Masters also said the Football League's request for 25% of all pooled broadcast revenue, an uplift of some £400m, would be "a disaster".

"Value has to be retained where it is generated otherwise that value can't be generated," he added.

"Premier League clubs have to be able to attract the best players, talent and managers and create that incredible competitiveness."

Code Red: The race to save Raul Jimenez's life and his battle to returnShould historians be jealous? Josh Widdicombe's extraordinary family tree revealed