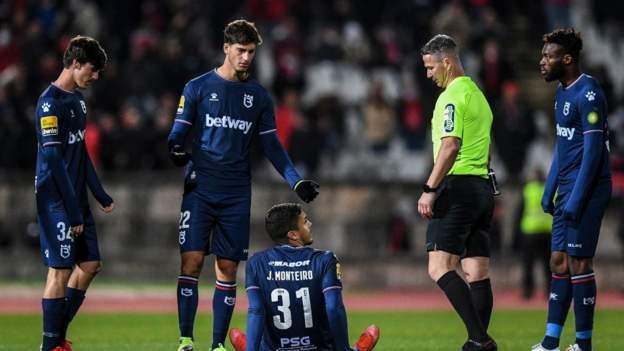 Benfica have lost just once in the league this season

Belenenses' Portuguese top-flight match against Benfica was abandoned early in the second half because the home side had just six players on the pitch - having played the entire first half with nine men, including two goalkeepers.

A Covid outbreak left Belenenses with 17 players unavailable and they were 7-0 down at half-time.

And, after a delayed break, the team third from bottom emerged with just seven players before an injury immediately after the restart left them with just six - resulting in an immediate abandonment.

Manchester City's Portuguese midfielder Bernardo Silva wrote on Twitter earlier in the match: "What is this? Am I the only one who doesn't understand why the game hasn't been postponed?"

Belenenses, who had to field goalkeeper Joao Monteiro in defence, got off to the worst possible start scoring an own goal within the first minute.

Such was their dominance with the two-man advantage, Benfica averaged 85% possession.

The own goal from Brazilian defender Eduardo Kau plus two goals from Haris Seferovic, one from Julian Weigl and a Darwin Nunez hat-trick had put the visitors in control by the break.

The match was called off a minute into the second period as Monteiro dropped to the floor, forcing the referee to abandon the game because the minimum number of players - seven - were not on the field.

"Football only has heart when it is an example of public health. Today, football lost its heart."

João Monteiro went off injured after Belenenses had used all subs.

Diogo Calila went off injured after Belenenses had used all subs.

António Montez went off injured after Belenenses had used all subs.

João Monteiro (Belenenses) wins a free kick in the defensive half.

Attempt blocked. Haris Seferovic (Benfica) header from the centre of the box is blocked. Assisted by Valentino Lazaro with a cross.

Attempt saved. Darwin Núñez (Benfica) right footed shot from outside the box is saved in the bottom right corner. Assisted by João Mário.