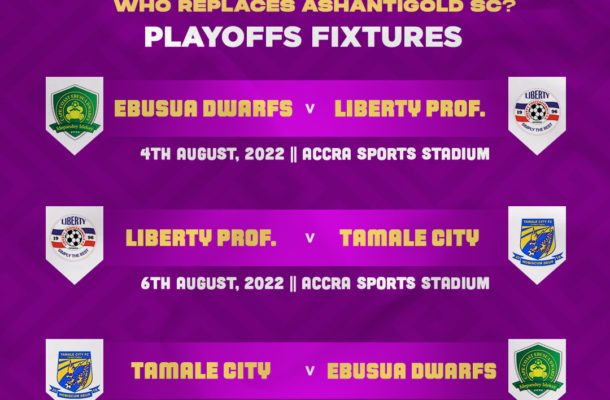 Former topflight sides Ebusua Dwarfs FC and Liberty Professionals will square off in a play-off match on Thursday August 4, 2022 for a place in the 2022/23 betPawa Premier League.

This is the opening match of the three-team play-off matches which includes Tamale City FC.

The three teams who placed second in their respective Division One League zones will compete in a three-way all-play-all competition to determine a replacement for demoted Ashantigold SC following a decision by the GFA's Executive Council.

Per the draw which was conducted at the GFA Secretariat on Monday August 1, after Thursday's game Liberty Professionals will be in action again on Saturday, August 6, 2022 against Tamale City.

The last game will be played on Monday, August 8 between Tamale City FC vs Ebusua Dwarfs.

Frederick Samena has been appointed as Referee for Thursday’s opening match and will be assisted by Theophilus Akugre and Alex Osam.

The fourth Official will be James Taylor with Kwabena Asamoah Boakye as Match Commissioner.

All three matches will be played at the Accra Sports Stadium and will all kick off at 3pm.