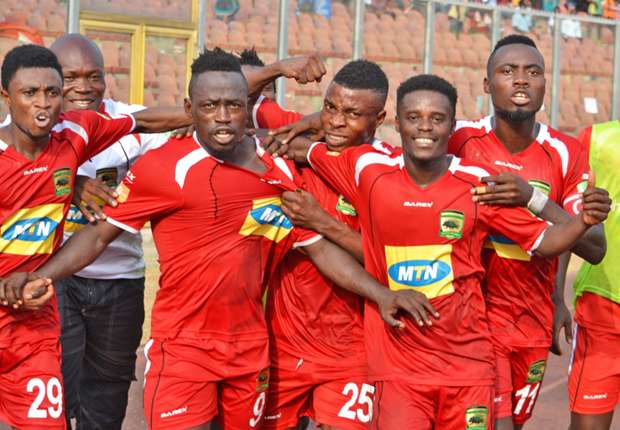 ​Asante Kotoko needed a late penalty goal from defender Abeiku Ainoonson to defeat Bechem United 1-0 on Wednesday to extend their early unbeaten run to three games.  Bechem United with Ahmed Toure, darling boy of kotoko fans, in their fold frustrated Kotoko for 84 minutes but Ainoonson stepped up to save the day at the Baba Yara stadium.

Kotoko dominated a tense, action packed first half but failed to break Bechem United’s resolve as the away side frustrated the Porcupines to a draw.

However, Kotoko would have scored had they been more clinical in front of goal as they managed to create some decent openings.

Exciting winger Frank Sarfo Gyamfi was constantly fouled as he weaved his magic but the resultant free-kicks was either poorly taken or well dealt with by defense men of Bechem United.

Goalkeeper Felix Annan saved Kotoko from conceding early in the second half, repelling Yaw Arnol's strike from inside the box. It was Amed Toure who teed up his strike partner.  On the other hand Kotoko continued to fluff their chances. Ollenu put Sarfo Gyamfi through on goal but the latter failed to connect much to the dismay of fans. Coach Zdravko Lugarusic desperate to get full spoils brought on striker Kwame Boateng and Baba Mahama and it paid off in the 82nd minutes as Boateng set up Emmanuel Gyamfi but the latter was fouled in the box which was adjudged a penalty. Defender Abeiku Ainoonson converted with aplomb to decide the feisty clash in favor of Kotoko.

Kotoko with 7 points move to second on the table, two points behind leaders Aduana Stars.