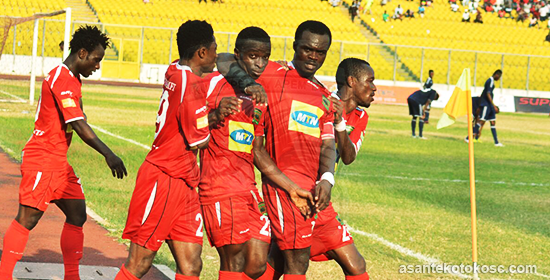 The Porcupine Warriors were made to work hard for the all-important victory at the Baba Yara stadium. Lugarusic made three changes to the side that drop points at Bolga All Stars with returnee defender Awal Mohammed starting in midfield, fully fit captain Amos Frimpong was handed his second start and Ashittey Ollenu replacing Obed Owusu.

And it was one of the three – Ollenu – who came close to opening the scoring for Kotoko in the early minutes. His header from free kick missed the target narrowly. Ollenu, again, was guilty of another miss after he wriggled his way through but shot off target.

WAFA’s first attack after 10 minutes produced no real goal threat. However, minutes later Felix Annan was called to duty as he dived to save a powerful grounder by Cheick Omar.

Then, with less than a minute to end the first half, Ollenu squandered a one-on-one.

After recess, Kotoko applied more pressure and were rewarded with the first goal which turn out to be decider. A tactical switch by Zdravko saw Frank Sarfo Gyamfi come on for defender Abeiku Ainoonson and with 15 minutes on the field, former Maritzburg winger scored with a decent header from an excellent Eric Donkor cross.

The game got physical after the goal. Kotoko's defender Edwin Tuffour Frimpong received a yellow card for a rough tackle on WAFA skipper Gideon WAFA.

But it was Kotoko who continued to pile on the pressure for the second goal. Baba Mahama saw his shot from an acute angle blocked. WAFA failed to threaten in the dying embers as Kotoko run away with three points.