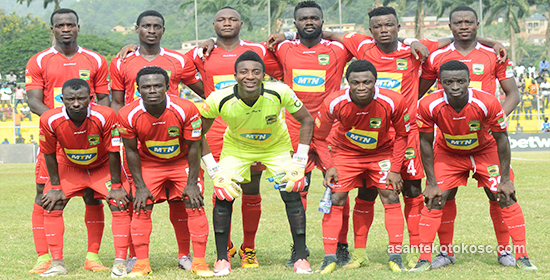 Frederick Boateng scored a late winner for Asante Kotoko, who returned to winning ways by beating Ebusua Dwarfs 2-1 at the Baba Yara stadium on Sunday.

Boateng clinched three points in the 82nd minute after running onto a brilliant pass from Obed Owusu and shooting past goalkeeper Danso Wiredu Mensah.

Owusu gave Kotoko the lead after 15 minutes but a resilient Dwarfs side equalised through Solomon Okudzeto eight minutes into the second half.

Buoyed by the goal, Dwarfs went all out for maximum points but were dealt a huge blow as Awudu Masawudu was sent off for a second bookable offence.

Thereafter the game tilted in favour of the hosts who grabbed the winning goal with eight minutes remaining.

The win means Kotoko have not lost a home game since their 0-1 loss to New Edubiase on 23rd April 2016.

They occupy the fourth position and are three points behind leaders AshantiGold while Dwarfs have dropped to the relegation zone.