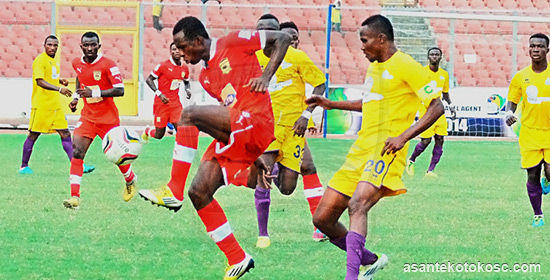 Asante Kotoko are without a win after Match Day 3 of the ongoing Ghana Premier League following a 2-2 draw with Medeama at Baba Yara Stadium on Sunday.

Kotoko benefited from two fortuitous goals whilst Medeama scored two spectacular goals to earn their first point of the season.

Both sides after dropping points in their previous games were desperate for maximum points which made the game a very aggressive with a couple of players picking up injuries.

Medeama lost defender Paul Aidoo to injury whilst Kotoko striker Dauda Mohammed, who recovered from ankle injury, suffered head injury and had to be rushed to the hospital.

The first half ended in share of spoils with Kotoko fetching the first goal through Bennett Ofori.

The former Berekum Chelsea forward benefited from a mistake from goalkeeper Michael Sai to slot home the opener.

Before experience midfielder Malik Akowuah equalized for Medeama with an absolute sensational strike from free kick.

After recess, referee Prosper Adii allegedly attacked by a section of fans did not show up so had to be replaced by fourth official Emmanuel Ansah who supervised the second half.

Michael Yeboah restored Kotoko's lead in the 50th minute and they held on to it until the 74th minute when super sub Bismarck Oppong hit a cracking finish to level the score.

After, Medeama created a couple of decent chances and had to be denied a winner by post and Kotoko goalkeeper Eric Ofori Antwi.

The result means both teams have a point each however Kotoko have an outstanding game against Ashanti Gold on Wednesday.

Medeama's next fixture is against struggling Ebusua Dwarfs.