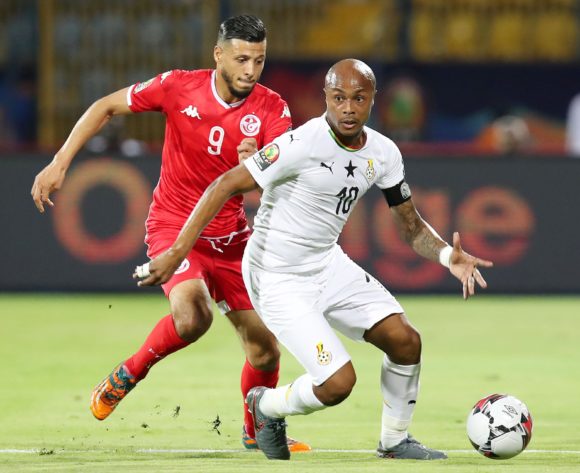 Andre Ayew of Ghana challenged by Anice Badri of Tunisia during the 2019 Africa Cup of Nations Last 16 match between Ghana and Tunisia at the Ismailia Stadium, Ismailia on the 08 July 2019 ©Muzi Ntombela/BackpagePix
Share

Ghana's journey at the 2019 Africa Cup of Nations has ended at the round of 16 after losing on penalties to Tunisia on Monday evening.

The Carthage Eagles won the shootout 5-4 to set up a quarter-final date with Madagascar on Thursday.

An own goal by Rami Bedoui cancelled out Taha Khenissi's second-half strike as the game went into the extra time and subsequently into the shootout.

Tunisians converted all their spot-kicks with Ghana's only miss coming from striker Caleb Ekuban.

Following a dominant first half, Kassim Nuhu struck the post with a header. Andre Ayew's rebound was parried by Tunisian goalkeeper.

Two minutes to halftime Black Stars took the lead when Andre Ayew backheeled the ball into the net but the goal was disallowed by the referee.

The referee insists the ball hit the hand of Thomas Partey in the build-up to the goal but television replays proved the decision was a wrong one.

Black Stars continued to dominate after the break with Jordan Ayew testing the goalkeeper with a header in the 53rd minute.

Tunisian, however, upped their game and began creating chances of their own.  In the 70th minute, Taha Khenissi controlled a fine pass into the box and takes a shot to the bottom left corner, but the ball was cleared.

Two minutes later, Khenissi again, this time he crashed the bar with a powerful header from a corner kick.

But it didn't take long for Khenissi to redeem himself as he connected with a low cross to put Carthage Eagles in front in the 73rd minute.

On the 81st minute, Wakaso took a shot from around the penalty spot and aimed towards the left side of the target. Mouez Hassen was alert, made a superb save and parried the ball onto the post.

With the three minutes remaining, Black Stars equalised force the game into extra time. The goal coming off the head of Tunisian substitute defender Rami Bedoui.

Ghana were the better side in extra time. Jordan wasted glorious opportunity to seal the victory before Kwabena Owusu shot straight into the hands of goalkeeper with the last kick.