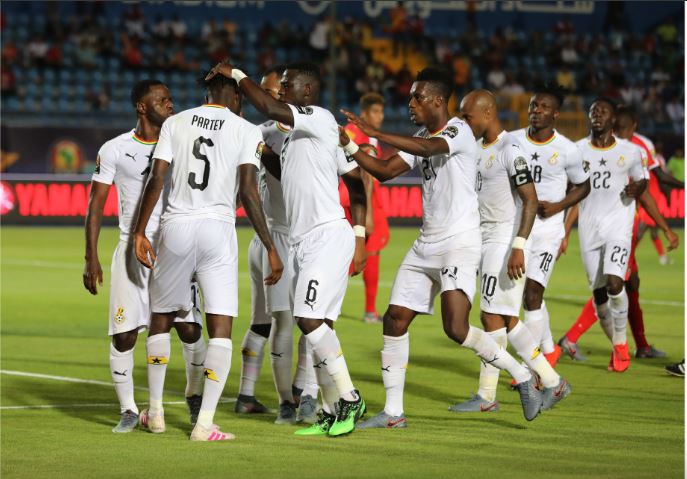 Ghana are through to the Round of 16 at the 2019 Africa Cup of Nations after a hard-fought 2-0 victory over Guinea-Bissau on Tuesday evening.

The goals came from the boots of striker Jordan Ayew and midfielder Thomas Partey as the Black Stars finished top of Group F ahead of Cameroon, who were held to a goalless draw by Benin.

Kwesi Appiah's charges struggled for most parts of the first half and were fortunate not concede.

Guinea-Bissau had a penalty shout overlooked by the referee when Mama Balde went down under the challenge of Joseph Aidoo in the 15th minute.

Three minutes later, they were unlucky not have taken the lead. Piqueti unleashed a thunderous effort which was deflected onto the crossbar by goalkeeper Richard Ofori.

Jordan Ayew against the run of play crashed the left post with a low effort with Andre Ayew failing to find the target with rebound. – 36

Samuel Owusu found Kwabena Owusu with a lovely cross but the striker steered his header well wide of the left post.

They upped the ante few minutes to recess. Thomas Partey low drive was parried to safety by Bissau goalkeeper.

A minute after the break, Jordan Ayew broke the deadlock. The striker finished a beautiful individual effort with a superb strike from inside the box.

On 53 minutes, Joseph Mendes was a whisker away from the equalizer when he rattled the right post brilliant shot from the edge of the box.

Jordan rattled the left post for the second time in the match with a shot inside the box.

Guinea-Bissau failed to threaten the Black Stars goal as the game drew to a close with Ghana claiming full spoils.