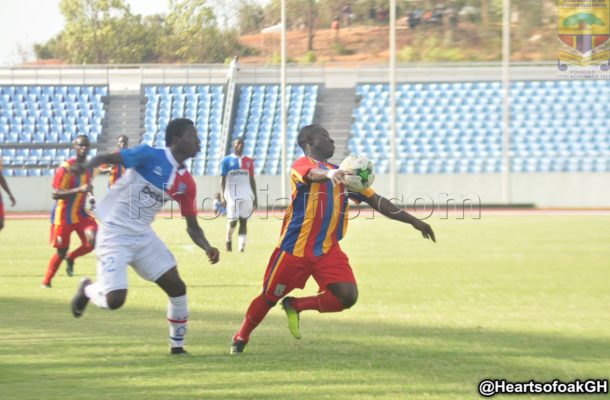 Hearts of Oak failed to replicate their scintillating performance against Asante Kotoko over the weekend as they were held by Liberty Professionals on Match Day 11 of the Ghana Premier League on Wednesday.

The Rainbow Club went into Wednesday's fixture in a spirited mood following their victory over Asante Kotoko in the Super Clash at the Baba Yara Sports Stadium on Sunday.

While the Scientific soccer lads were looking to bounce back after their disappointing 1-1 stalemate against struggling WA All Stars in Dansoman.

Liberty started the game sharpest and were a bit unlucky not to take the lead in opening 10 minutes thanks to two brilliant stops by Hearts goalie Ben Mensah.

Neither team was able to break the deadlock in the opening 45 minutes as it ended goalless.

The second half was tale of missed opportunities as both teams again struggled for cutting edging in the final third.

A draw is a fair reflection of the game and neither teams will be too unhappy to share the spoils.