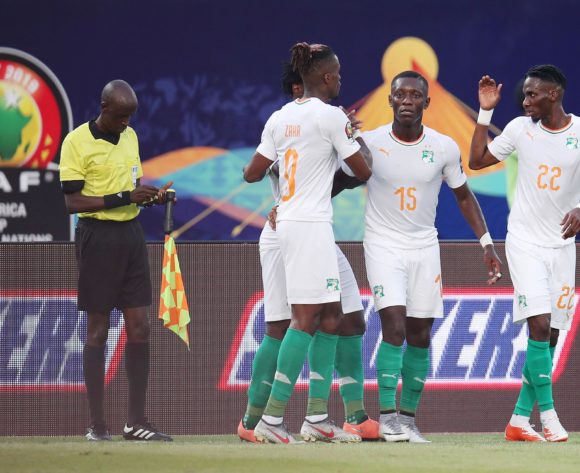 Max Gradel of Ivory Coast (c) celebrates goal with teammates during the 2019 Africa Cup of Nations match between Namibia and Ivory Coast at the 30 June Stadium, Cairo on the 01 July 2019 ©Muzi Ntombela/BackpagePix

Ivory Coast thumped Namibia 4-1 in their final 2019 Africa Cup of Nations Group D match on Monday night at the 30 June Stadium in Cairo to qualify to the round of 16.

The Elephants finished second behind Morocco and will play their last 16 clash in a week’s time in Suez against the Group E winner – likely to be Mali.

The Brave Warriors, meanwhile, bow out of the tournament with three losses from as many outings.

Namibia started strongly and tested out the Ivorian defence with several half-chances, before creating a great opportunity in the 20th minute: Petrus Shitembi provided a fine cross from the right flank to pick out Peter Shalulile, but the forward put his header wide of the target.

Four minutes later Shalulile had another great opening, running onto a skewed shot from Deon Hotto, but he was unable to beat Elephants goalkeeper Sylvain Gbohouo from close range.

Ivory Coast’s first chance arrived in the 34th minute when Namibia goalkeeper Lloyd Kazapua was unable to control a ball and Wilfred Bony picked up the rebound, though the striker was unable to get the better of the gloves-man from two successive attempts.

The Elephants then claimed the lead in the 39th minute, with Max Gradel running onto a great ball over the defence from Frank Kessie before firing home a powerful volley from a tightening angle on the right of the penalty area.

And it was 2-0 within the opening quarter hour of the second half, as Serey Die saw his hopeful long range shot deflect off the head of defender Ryan Nyambe to leave Kazapua stranded.

Yet the Brave Warriors kept fighting and hit back in the 71st minute. A poor clearance from Gbohouo went straight to Joslyn Kamatuka, who did well to find off a challenge before sending a low shot past the goalkeeper to make it 2-1.

Ivory Coast restored a two-goal lead in the 84th minute, with Wilfried Zaha finding space in the penalty area before cutting inside from the left and sending a slow shot under the body of Kazapua for 3-1.