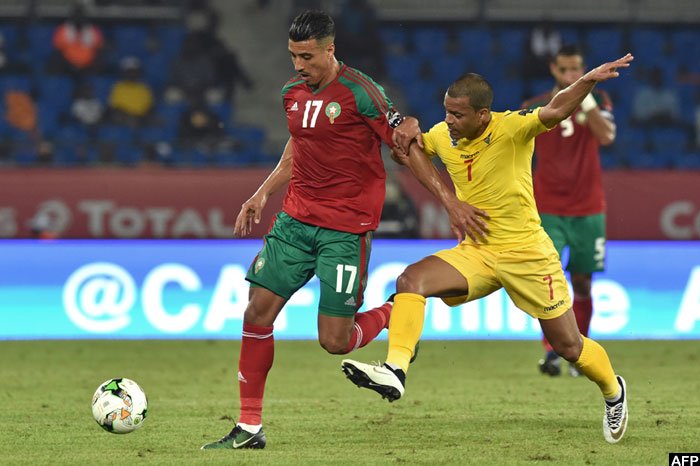 The Atlas Lions of Morocco re-lived their dream of making it to the quarter finals of the 2017 AFCON coming back from a goal down with a magical performance to beat the Sparrow Hawks of Togo by 3-1.

The Hawks broke the virginity of the game under four minutes when Mathieu Dossevi's shot from a swift counter attack left the Moroccan goalie at bay to hand Togo the lead but Morocco responded quickly when Aziz Bouhaddouz out-jumped his marker to head home a corner kick to fetch the equaliser in the 14th minute.

Six minutes after the equaliser, Herve Renard's men shot themselves ahead from a set piece after Roman Saiss connected excellently to El Khadouri's expertly taken free kick to make it 2-1.

Youssef En-Nesyri came off the dug out to make it 3-1 with a 30-yarder drive leaving Togo shot stopper Koussi Agassa crawling with eighteen minutes to end the game.

Morocco pressed on to increase the tally but it was Claude Le Roy's men who had the better chance of the second half when Floyd Ayite danced around two defenders with Adebayor as a decoy but his final shot missed the post by inches.

The win has rekindled Morocco's chance of making a quarter final berth leaving Togo with an audacious task of beating impressive DR Congo in the final group game to qualify.

Morocco will round it off on Tuesday with Côte d'Ivoire to seal their qualification, a game many believe will be a tough encounter.