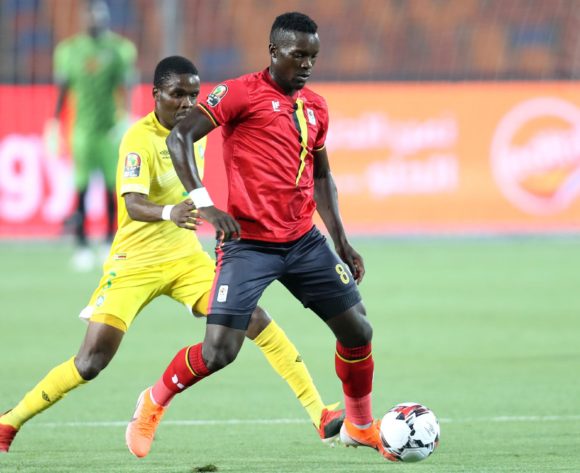 Khalid Aucho of Uganda challenged by Danny Phiri of Zimbabwe during the 2019 Africa Cup of Nations Finals match between Uganda and Zimbabwe at Cairo International Stadium, Cairo, Egypt on 26 June 2019 ©Samuel Shivambu/BackpagePix
Share

Uganda have taken another step towards qualification for the last 16 of the 2019 Africa Cup of Nations after they played out a 1-1 draw with Zimbabwe on Wednesday evening.

The result at the Cairo International Stadium is a good one for the Cranes, who are top of Group A on four points (pending the result of the late game between Egypt and DR Congo) and within touching distance of progression.

The Warriors, meanwhile, will likely need to win their final group match against DR Congo to have a chance of moving into the knockout rounds.

Uganda enjoyed early dominance and claimed the lead in the 12th minute. A fine passing move allowed Abdu Lumala space on the right of the penalty area to get away a low shot – his effort was only half saved by George Chigova, and Emmanuel Okwi was on hand to turn home the loose ball from close range.

Midway through the first half Zimbabwe had a great chance to draw level, with Khama Billiat’s square ball from the left flank teeing up captain Knowledge Musona just a few metres out from the posts, but he blazed his effort over the target.

A couple of minutes later Billiat pulled a left-footed shot wide of the target, with the Warriors beginning to impose themselves on Uganda’s defence and press hard for an equaliser.

The Southern Africans bossed the remainder of the first half, and claimed a deserved leveller in the 40th minute when Musona and Odidy Karuru combined beautifully to set up Billiat, who provided a deft finish past Denis Onyango to see the teams go to the interval at 1-1.

Zimbabwe should have claimed the lead six minutes into the second half when Karuru did fantastic work down the right of the penalty to take Onyango out of the game and give Musona an open goal to aim at, but the striker hit the crossbar in what will surely go down as one of the misses of the tournament.

The Warriors were mere inches from going ahead in the 69th minute when substitute Evans Rusike squeezed a shot under Onyango from close range, but amazingly the spin on the ball stopped it almost dead on the goal line and allowed the ‘keeper to claw it away from danger.

The match featured another incredible miss on 75 minutes, this time from Uganda, when Chigova could only palm a shot toward the unmarked Patrick Kaddu, but he somehow volleyed over an open goal from within the six-yard area.

The last notable chance of the match went the way of Zimbabwe’s Musona in the first minute of injury time, as he found space around the ‘D’ of the penalty area, but his radar remained off as he struck the shot well wide.