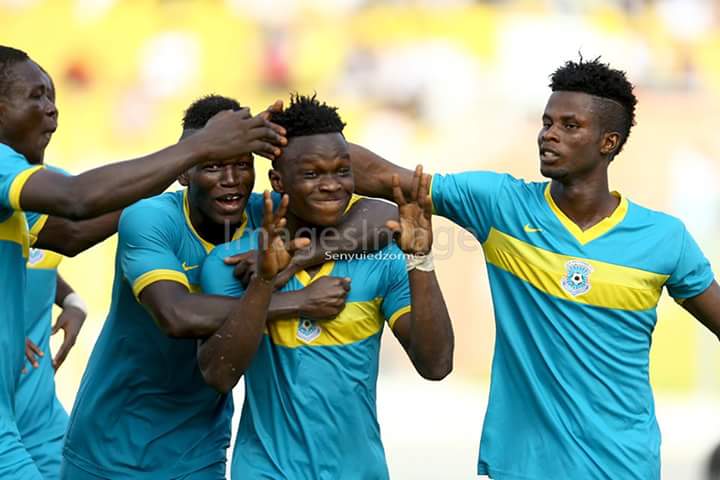 Wa All Stars edged closer to their maiden league title after defeating visiting Dreams FC 3-1 at the Wa Park in the Ghana Premier League on Sunday.

Winger Emmanuel Ocran was the architect of all three goals scored by the leaders as he scored twice from the spot before adding another with a superb strike.

The Northerners positioned their minds for victory to further fuel their quest to tighten their grip at the top of the table.

Dreams head coach C K Akunnor urged his side to press the league leaders at their own backyard. The former Ghana skipper named youngster Michael Sarpong, Emmanuel Hayford, Abdul Bashiru and the experienced Eric Gawu in his starting line-up.

But forward Emmanuel Ocran ensured All Stars stayed on track after firing them ahead in the 5th minute through a spot-kick. The 21-year-old hit a clinical ball to beat Mozart Adjetey in the visitors posts.

Ocran registered his brace in the 7th minute after ghosting into the box and pouncing on a loose ball to cushion the lead for the hosts. The former Schaffhausen triallist took his tally to three goals in the last two games for All Stars.

Youngster Ben Quansah halved the deficit for Dreams on 31 minutes. Veteran Eric Gawu won a free-kick in a vital area and Dreams took advantage of a defensive mishap to score for the visitors.

Dreams physio Commey-Bortsie was ordered into the stands following a touchline misconduct.

Moments later, Mozart Adjetey made a crucial clearance to prevent Emmanuel Ocran from scoring a hat-trick on the afternoon.

But Ocran eventually scored the third goal to seal victory for the leaders. The winger was fouled inside the box by Abdul Bashiru who was sent off as a result. Ocran clinically finished off for his 3rd on the day.