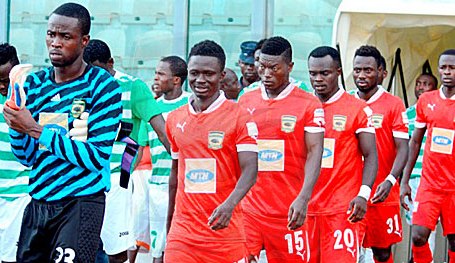 Asante Kotoko battled to a 1-1 draw with Hasaacas after playing the last quarter of the game with a man down to earn a vital point as they continue to coast towards a third successive triumph in the First Capital Plus League.

Kotoko arrived at the Sekondi Essipong Stadium with a 10-point advantage with six games to the end of the season.

The champions controlled the game from the start but their hosts were more threatening at goal.

Hasaacas were the first to get a sniff at goal with striker Joseph Mugre missing from a header at the near post after being played in by Frederick Quayson after just six minutes.

Kotoko responded in like term nine minutes later with a chance of their own.

Striker Abdul Aziz Yusif however failed to direct his header at goal from an inviting driven cross from Issah Yakubu.

Hasaacas will however not renege on their efforts to get the opener and made another attempt after 21 minutes.

Joseph Mugre was again the culprit as he failed to head in after being left unmarked in the vital area.

Both sides headed into recess after a goalless first half but started out brightly in the second period.

The ex Real Tamale United hitman should have however done better after being played clean on goal.

The resulting penalty however fetched Kotoko the lead as an unmarked Issa Yakubu popped up at the back post to tap in the opener.

Hasaacas however pulled even with a converted penalty kick by in the 73rd minute with Abeiku Ainooson gifting the hosts the equalizer with a clumsy challenge in the box.

The local Black Stars defender picked up his second yellow card for his poor challenge to make an early exit.

Tennesson Opoku stepped up to smash in for Hasaacas much to the delight of the impressive crowd at the Essipong Stadium.

Hasaacas with the manâ€™s advantage pressed on for the winner which never came as Kotoko held to earn a vital point.