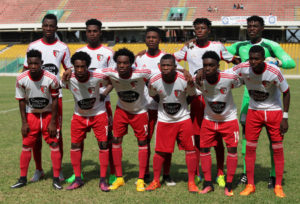 Defending Ghana Premier League champions Wa All Stars were mauled 4-1 by WAFA  SC at home in a delayed outstanding fixture at the Malik Jabir Stadium on Sunday.

It was the first away win for the Academy Boys in 27 matches and for Wa All Stars their first home defeat in 20 matches.

Richard Danso scored a brace in both halves to help his side manage an important win at a very difficult ground to win.

Daniel Lomotey and Majeed Ashimeru both scored late in the game to thrash All Stars at their own backyard after Sadiq Alhassan's penalty could only prove a consolation.
The win takes WAFA to third place on the league log with 14 points in eight league matches.