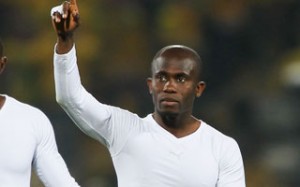 Bryan Ruiz's first-half goal put Twente in front but NAC goalkeeper Jelle ten Rouwelaar made a couple of fine saves to keep his side in the game.

And he got his rewards as Ali Boussaboun equalised with nine minutes remaining and Thilo Leugers' error allowed Matthew Amoah to grab a last-minute winner.

Denny Landzaat's drive forced an even better save from Ten Rouwelaar before Leugers' shocking back-pass was seized upon by Amoah, who finished in opportunistic fashion.

Blackpool and bottom placed West Ham United settled for a scoreless stalemate at the Upton Park in a match of many missed chances.

Ghana first choice goalkeeper Richard Kingson made his second League appearance for Ian Holloway's side after replacing Matthew Gilks before the start of the second half.

John Pantsil was still kept on the bench by manager Mark Hughes as Fulham drew goalless with Newcastle United at St James Park.

Leeds United hugely relied on the abilities of winger Lloyd Sam to seal a 3-1 win over Bristol City in the Npower Championship.

Sam replaced Max-Alain Gradel on the hour mark and became the catalyst for the win.

Queens Park Rangers surrendered their lead at the top log to Cardiff City after failing to pick maximum points in their game at Nottingham Forest.

Dundee United slipped to sixth place after being held 1-1 at the Tannadice Park by Kilmarnock.

Prince Buaben who scored for the Terrors in mid-week played a starring role for Dundee.

An improved Hibernian side continued their resurgence rally after recording a 2-1 win over visiting Motherwell at the Easter Road Park.

In the Segunda Division, Granada FC silenced a stubborn Barcelona B side 4-1 at the Estadio Los CÃ¡rmenes.

Jonathan Mensah was at the heart of defence for Granada but striker Ransford Osei is expected to play with the Granada team B on Sunday.

Ex-Ghana captain Stephen Appiah warmed the bench for Cesena in their 1-0 defeat at Fiorentina.

In the Serie B, Livorno suffered a second straight defeat at Crotone by going down 2-1.

Midfielder Ahmed Ampimah Barusso started for Livorno but was replaced on the hour mark.

Dominic Adiyiah missed out on Reggina's first team when they drew 1-1 with Torino at home.

Charles Takyi played 65 minutes for St Pauli before being replaced by Rouwen Hennings but defender Davidson Drobo-Ampem is yet make a Bundesliga debut for St. Pauli.

Elsewhere at the Volkswagen Arena, relegation trapped Schalke 04 earned a hard fought point after coming from two goals down to earn a point.

Olympique Marseille's inconsistency in the Ligue 1 was highlighted on Saturday by drawing 1-1 with Lens at the Stade VÃ©lodrome.

Andre Ayew played 74 minutes before paving way for Mathieu Valbuena but his younger brother Jordan was an unused substitute in the game.

Breda came from behind and Mathew Amoah grabbed the winner for the Yellow Armies on the 90th minute mark.

David Nii Addy did not play for Academica de Coimbra in their 1-2 home defeat at the hands of Sporting Lisbon.

Bernard Yao Kumordzi's impressive performance could not help Panionios avoid a 1-0 defeat at home to Atromitos.

Lierse midfielder Mensah Akwetey was not part of the squad that made the trip due to suspension.

Mark Edusei lasted the entire duration for Bellizona which were held to a 3-3 home draw by Neuchatel Xamax.

Both Eric Gawu and goalkeeper Stephen Ahorlu started for Hapoel Ashkelon which lost 1-0 at home to Maccabi Petak Tikva.

Ashkelon are slipping close to the relegation zone.