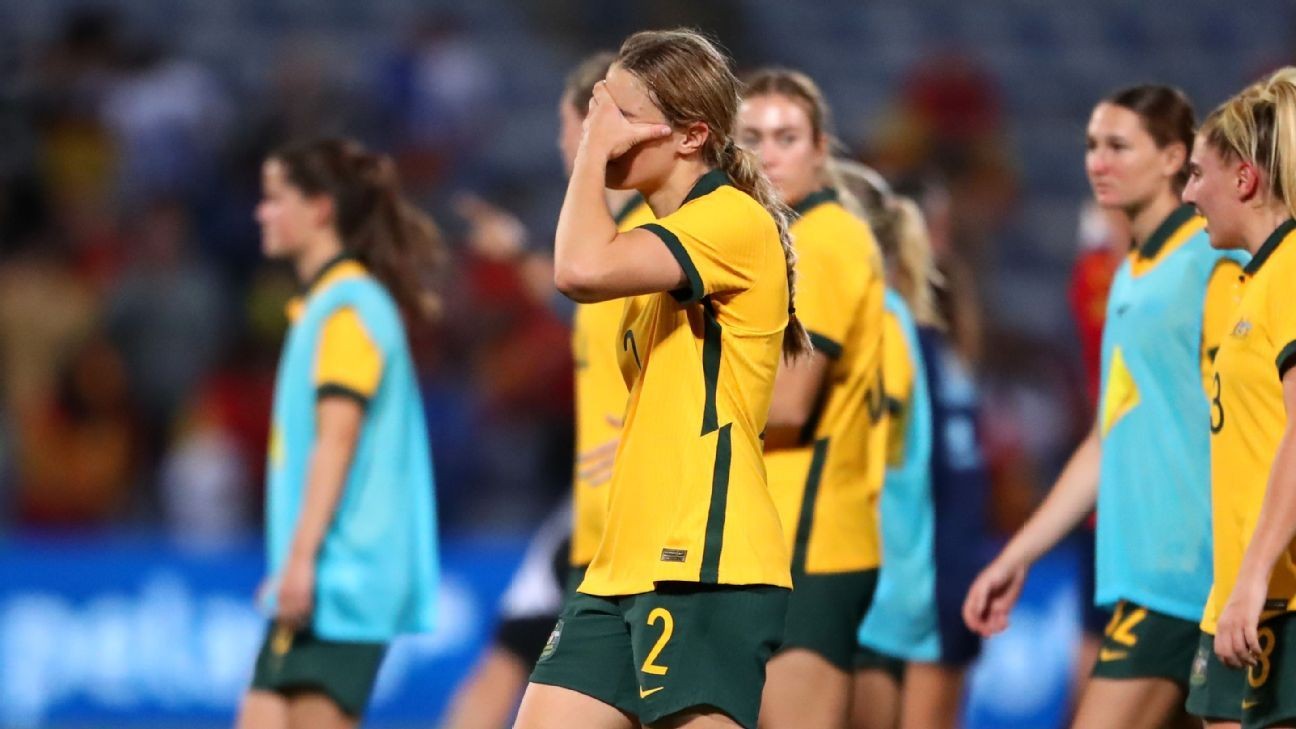 Set up in a low defensive block and unable to keep the ball for extended periods, the coach's prediction rang true as Australia collapsed to a 7-0 defeat in Huelva, melting away in the second half as their foes poured in six goals with scant resistance mounted in the opposite direction.

The phrase "the dam wall breaking" springs to mind but, ultimately, doesn't quite provide an accurate picture. Dam walls aren't supposed to fail, it's a shock and a disaster when they do. And while the Australian defence can in no way be said to have played well at the Estadio Nuevo Colombino, the amount of constant pressure they were forced to endure throughout the game meant that such a collapse, albeit perhaps by not that great a margin, should have been unsurprising.

By the end of the game, the Spaniards had clocked up 76% of possession and sent in 23 shots on goal, with 10 on target. In contrast, the Matildas were only able to muster four shots on Sandra Panos' goal with their 24% of possession, and not a single one of these was actually on target.

But such was La Roja's control of the game, especially the areas on the pitch where they were losing the ball, that even this 24% possession felt less like meagre attempts to fashion some level of opposition and more so the Spanish just letting their foes have the ball a bit as they reset their shape before winning the ball back and launching forward with another attack.

Even in the first half, in which the hosts were blunted in their attacks until Aitana Bonmati produced a piece of individual brilliance to open the scoring in the 44th minute, there was little to demonstrate that the Matildas had any real avenue to laying a glove on their opponents: Katrina Gorry bouncing an effort off the crossbar in a rare move forward in the 23rd minute to provide a light in the otherwise surrounding darkness.

This was a game in which Gustavsson, absent nine ostensibly first-choice players from his squad and forced to further recalibrate after the withdrawal of Alex Chidiac and Angela Beard from the announced 23, went the ultra pragmatist route. The plan, it appeared, was to press high and aggressively when Spain was deep in their half and, when they passed a certain point on the pitch, to retreat into a low defensive block and look to transition.

The problem was that the Spanish had so much of the ball that there ended up being less than a handful of opportunities for the Matildas' attack to actually get the ball into areas of the pitch where they were in a position to press when they lost it. Such was Spain's control of the midfield, Australia's attempts to transition were frequently ended by turnovers in their own half, which in turn served to keep the defence under constant pressure as their opponents effectively lined up to attack as if they were at a buffet line.

Another problem was that Spain, to be blunt, had better players.

As the Matildas slumped to a sadly predictable 7-0 friendly defeat against Spain, many were left wondering why Australia scheduled the game in the first place. Fran Santiago/Getty Images

Of course, that means there is a narrative to be fashioned that a severely understrength Matildas side being able to hold out the favourites of next month's European Championships for almost an entire half constitutes a strong positive to take from proceedings. It was certainly the line that the Matildas' coach took from the game.

"In the first period, we got answers that, considering the experience that we had on the park for the first 45 minutes ... to commit to the game-plan like that against Spain, one of the world's best teams that are peaking for the Euros -- and we're in a completely different situation right now -- I'm actually happy and proud of the girl's commitment," he said.

"The effort and defending. When you need to play Spain sometimes you're forced to defend in a very different way than what you're used to.

Huge summer of women's soccer: Your guide to Euros, USWNT qualifiers and more2dESPNAustralia's Crummer has eyes on World Cup after almost losing leg13dStephanie BrantzWhat impact will Carpenter's injury have on the Matildas?25dMarissa Lordanic

The Swede, rightfully, also singled out Gorry for praise. Alongside 20-year-old defender Charlotte Grant, who now looms as the most likely replacement for Ellie Carpenter during her rehabilitation from an ACL injury, the diminutive midfielder was one of the few positives to be taken from what turned into a horror evening. She battled, often in vain, to try to wriggle free of pressure with the ball or to find space without it in positions that would allow her to get her team up the pitch.

"[Gorry] was world-class," said Gustavsson, unprompted. "She showed that she has the technique and tactical ability to match any player in Spain. And she showed that tonight. And her physicality and tackling. I was really happy with Mini and the commitment from the team in following the game plan in the first half."

Nonetheless, even the Matildas boss couldn't put a shine on a half in which his side conceded six goals -- three via headers -- and slumped to a heavy, demoralising defeat.

"The second half, we looked at other things," he said. "We wanted to rotate players, look at players and I want to be very clear now: this is not about blaming an individual player for this loss.

"These players are more representative of the situation that we're in right now. We finished the game with four players playing in the NPLW and one player playing in college. And to expect those individual players to match up against Spain -- it's not fair to the individual.

"But I'm ready to take that hit as a coach because I said from day one that we need answers and we need investment in our program. And I think this was a very, very clear half where we need to make investments and players need to get in environments where they can thrive and be ready for international football."

This, in itself, is indeed an important lesson for Australian football. More investment is needed to provide local players with better opportunities to be in elite environments at home. Not every player is going to be able to find the right situation to move to internationally and there need to be conditions at home conducive to development. And announcements from those who run the A-League Women competition, Australian Professional Leagues, are expected on this front this offseason.

play2:33Have the Matildas 'slammed the door' on Ally Green and others?

The Far Post podcast discuss what Ally Green's shifting allegiance to New Zealand says about breakthrough chances being award to players in their early and mid-20s.

But if these are lessons that needed to be reaffirmed against Spain, 12 months out from a home World Cup, is another matter.

Gustavsson reiterated that the absences of players like Sam Kerr, Steph Catley and Aivi Luik were unavoidable. The player's workload this season means they simply needed a break; Carpenter's ACL injury represented a stark warning. But he also made clear that this game has been in the works for a year, referencing post-game that this was the only window this game could be secured and that contracts had been signed and needed to be honoured.

With this advanced warning, should steps have instead been taken to ensure that players were available for this window over others? Kerr, for example, flew from England to Australia and played full games in April's series against New Zealand. Catley and Alanna Kennedy started both those games. Why?

Australia had already comfortably beaten the Football Ferns with a full-strength team at the Olympics. Surely that was the game to run out the likes of Jamilla Rankin and Taylor Ray, who at that point only would have been just over a week on from the ALW season, rather than against arguably the best side in the world, on their turf.

Now, even the positives from the first half will have questionable longevity. Will the Matildas ever set up in this ultra-pragmatic manner when they actually do have access to a full-strength squad? Likely not.

Thus, aside from the play of Gorry and Grant, the longest-lasting legacy that this game leaves on the Matildas squad may just be as a demonstration of who won't be in contention for 2023: Who needs more development or who, simply, isn't up to the level.

But with so few international windows left until the World Cup kicks off, was that really worth it? Is it worth the squad being demoralised and embarrassed by a group of players at a demonstrably higher level?

There's a game against Portugal to come on Tuesday to potentially salvage something, and the lower-ranked Portuguese do represent more favourable opposition. But beyond the disappointment, perhaps the biggest takeaway from the Matildas' heavy defeat is: What was the point of playing this fixture?