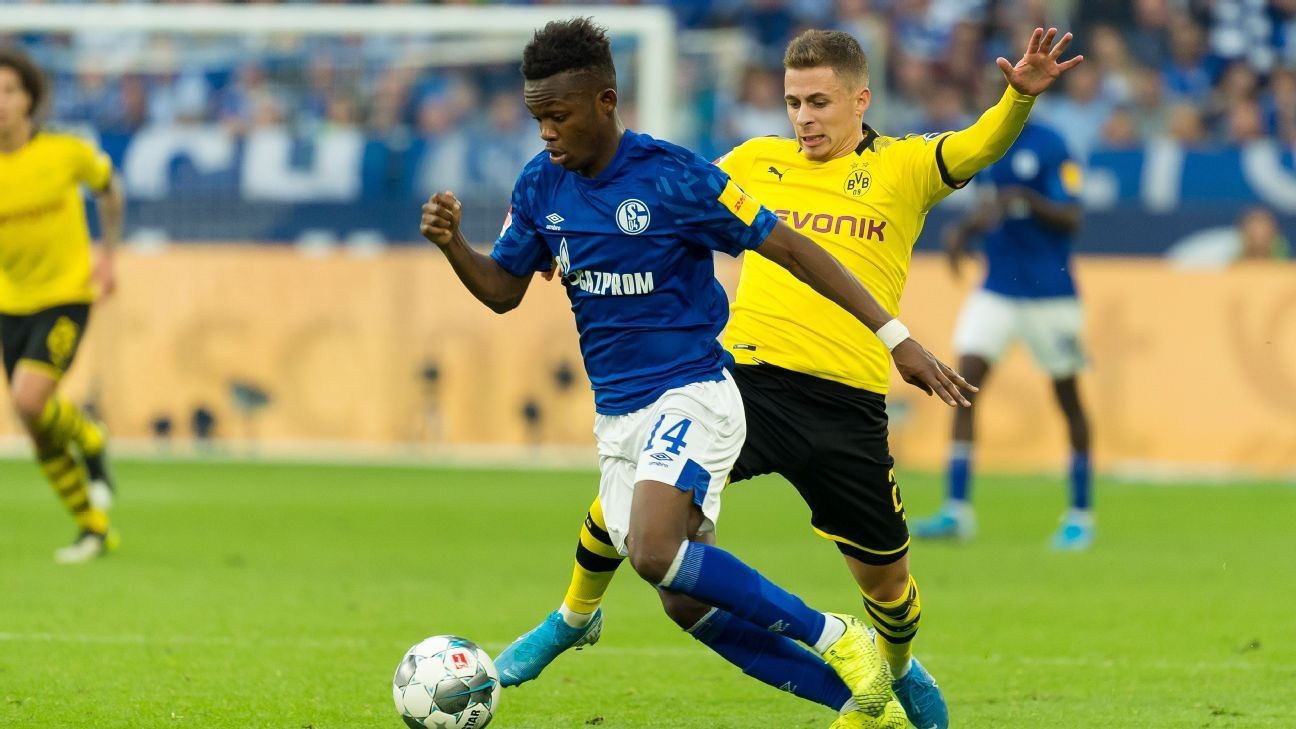 Rabbi Matondo has apologised to Schalke supporters after he was pictured wearing the shirt of their fierce rivals Borussia Dortmund in an Instagram post.

Borussia Dortmund and Schalke contest the Revierderby and there is little love lost between both sets of supporters.

Matondo was photographed wearing close friend Jadon Sancho's shirt for a one-to-one training session with a personal trainer and he came in for criticism from Schalke fans once the photograph started doing the rounds on social media on Tuesday.

"Addressing the pictures circulated on social media of me in the shirt of our biggest rivals, I am very sad and disappointed in myself for letting everyone associated with Schalke down. I want to clear this situation up and most importantly to apologise to everyone at the club, in particular our incredible fans, causing such hurt and upset was absolutely not my intention," Matondo said on social media.

"Being completely transparent -- I naively wore the shirt for a private, personal training session. The shirt was my very close friend Jadon Sancho's shirt. I wore it because it was Jadon's, and not because of anything to do with Dortmund.

"I did this not thinking of the consequences and how upset I would make a lot of people. There's no excuse for my immaturity."

Schalke's head of sport Jochen Schneider told Sky Sports Deutschland on Tuesday that having seen the post on Instagram -- which was originally from @sosathleticexcellence account but was then deleted -- he wanted Matondo to make amends.

"I made it clear to Rabbi on the phone what I think about such an ill-advised action," Schneider said.

"Sure, he's only 19, but it still must not happen. We have made it clear to him that he must show a reaction to this lapse on and off the pitch."

The 19-year-old Wales winger, who joined Schalke in 2019 from Manchester City, is one of the brightest prospects in the German top flight and was one of the few positives for Schalke from a disappointing 2019-20 campaign that saw them finish in 12th.

"I just want to say how deeply sorry I am to everyone offended and upset by my actions," Matondo's statement continued. "I can only promise everyone at the club that I am 100% committed to Schalke and always have been since joining the club. I've loved every single minute of being a Schalke player and my love for the club, fans and my teammates will never go.

"I will always give everything I have when I represent the club to show how much I love Schalke 04."