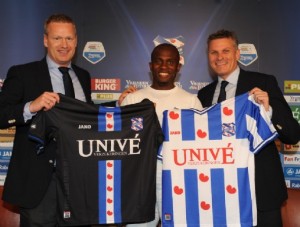 Ghanaian striker Matthew Amoah has returned to Dutch football by joining Heerenveen after a torrid time in Turkey, Ghanasoccernet.com can exclusively reveal.

The 31-year-old signed a one-year contract with Heerenveen Wednesday evening after leaving Turkish side Mersin Idman Yurdu where he suffered serious breaches of his contract.

Amoah's fortunes plummeted when he moved to Turkey last season but has returned to the league where he made his name in a bid to revive his flagging career.

The Ghanaian striker is delighted to have signed for the club in Holland where he scored 115 goals with Vitesse and NAC Breda and before leaving for Turkey.

"The Dutch football suits me. I am very happy that I'm going to play for SC Heerenveen," Amoah said.

"Heerenveen is a beautiful club, and always plays in the top tier and also they are often playing European club competitions.

"If you compare with my former club NAC, Heerenveen is much larger. I hope to perform well here.

"I want good show to supporters of Heerenveen. They will enjoy it."

Heerenveen technical director Johan Hansma is pleased with the arrival of the attacker saying he will add valuable experience to their young attacking line.

"We have many young strikers in the squad, and therefore we wanted to consciously attract an experienced attacker," Hansma said.

"Amoah can transfer his experience to the team especially the younger players and will even bring peace to the team if things are not going well."

He was also not given playing time which motivated him to leave the league where many Ghanaian players have suffered injustices.