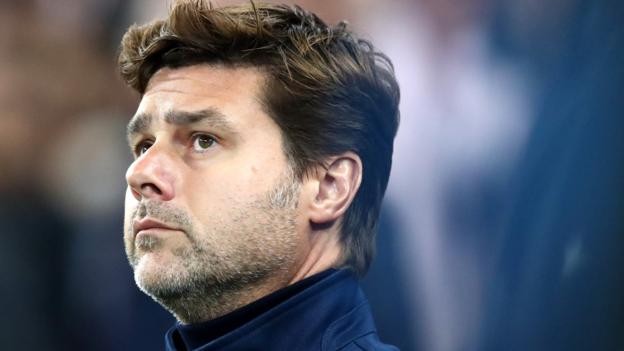 Tottenham chairman Daniel Levy made no attempt to disguise the ruthless decision that prompted the departure of Mauricio Pochettino - this was a sacking, not a parting of ways dressed up as mutual consent.

It will be seen by many as an extraordinary move, coming just months after the Argentine took Spurs to their first Champions League final, against Liverpool in Madrid.

With hindsight, Spurs' 2-0 defeat was the beginning of the end.

Something was broken that night at the Wanda Metropolitano and it has not been the same since for the club and their now ex-manager.

Why has it gone wrong so quickly for Pochettino?

Spurs seemed set fair for a golden future on that balmy night in Spain, when club and manager hit the pinnacle of a Champions League final appearance.

And yet the subsequent defeat appeared to open up all the frustrations that Pochettino had been feeling about his inability to work in the transfer market against the backdrop of the construction of the club's new £1bn stadium.

It was a situation exacerbated by that fact that players who he expected to depart in order to finance his squad restructuring - such as Christian Eriksen, Toby Alderweireld and Danny Rose - could not be sold.

The pain of that defeat was a watershed for Pochettino. He was unable to change the dynamic of his team and had simply run out of ways to recharge his own batteries and those of his players.

The 47-year-old, who later admitted he may have quit had Spurs beaten Liverpool that night, underwent a very obvious change in demeanour, cutting a sullen, downbeat figure.

Some close to the club even suggested he had become a distant figure on the training ground, where previously he had been hands-on and all-encompassing.

The warning signs were clear after a friendly win against Real Madrid in July when Pochettino made a very pointed remark about his influence - or lack of it - at the club.

He said: "Sell, buy players, sign contract, not sign contract. I think it is not in my hands, it is in the club's hands and Daniel Levy.

"The club needs to change my title and description. Of course I am the boss deciding the strategic play but in another area I don't know. Today I feel like I am the coach."

Sir Alex Ferguson used to talk about "the four-year cycle" at Manchester United, the crucial time when a team needs refreshing, fresh voices need to be heard, fresh ideas implemented by new players.

Pochettino, because of a financial straightjacket, could not do that. This season he performed like a stale manager in charge of a stale squad.

The Spurs set-up is heavy on players who have been with Pochettino most, if not all, of the way, such as Eriksen, Rose, Jan Vertonghen, Harry Kane, Dele Alli, and Eric Dier.

They have looked a side short on inspiration and it has been reflected in performances such as the humiliating 7-2 loss at home to Bayern Munich in the Champions League, the first time they had conceded seven goals at home in their 137-year history.

They are back on course to reach the knockout phase but as Levy said in his statement: "Regrettably domestic results at the end of last season and the beginning of this season have been extremely disappointing."

Spurs are currently 14th in the Premier League, 11 points behind Manchester City in fourth place, winning only three of their first 12 top-flight games.

And it was significant Pochettino felt compelled to talk about players with "different agendas" after the humiliating League Cup exit to League Two Colchester United.

In 2019, no Premier League side has lost more games in all competitions than Spurs' 18. The last time they lost more in a calendar year was in 2008 when they suffered 19 defeats under Juande Ramos and Harry Redknapp.

Has Levy made the right decision?

Outsiders - and indeed plenty of Spurs supporters - were quick to condemn the haste of Pochettino's departure and the brutal manner in which it was announced. And they make a valid point.

Pochettino, after all, took Spurs to within 90 minutes of Europe's most prized trophy and provided four successive top-four finishes after arriving from Southampton in May 2014.

He has rightly been credited with revitalising Spurs and putting them among Europe's elite, despite the financial restrictions placed on him by the move out of their old White Hart Lane home, becoming one of the most coveted coaches in European football.

Pochettino's overall record has been hugely impressive although, crucially, trophies have eluded him and Spurs.

His 55.9% winning record supports the argument of those who will criticise Levy for sacking Pochettino too quickly, refusing to show patience with a manager who gave Spurs great moments such as the dramatic comeback from two goals down against Ajax in the Champions League semi-finals that left the manager in tears on television saying: "Thank you football."

And yet, on the evidence of this season, something was clearly wrong at the heart of Spurs. If not exactly rotten, certainly stale.

Spurs have a new stadium to pay for and they cannot be seen to fall out of that elite group so swiftly.

Pochettino is a figure loved by Spurs fans, the song 'He's magic you know', becoming a familiar refrain. Even that, though, has been tested in recent times as he cut a jaded figure devoid of inspiration.

It is undoubtedly a high-risk gamble by Levy.

He will be well aware of the criticism he will face if his decision to sack him backfires - but his statement brooked no argument. He feels he has been left with no choice.

Now he faces a defining moment of his time as chairman.

What next for Pochettino and Spurs?

Pochettino's time at Spurs will be viewed as an outstanding piece of work when the dust settles on his dismissal.

And when he decides to return to the game, he will have no shortage of suitors.

The problem is that he may have to wait, although his intense, full-on approach means he may now actually benefit from a period of refreshment.

When any big jobs become available, Pochettino's name will be at the forefront of the contenders.

He was constantly linked with Manchester United, although Ole Gunnar Solskjaer is in charge now and has the backing of the club's board.

Pochettino would also interest Real Madrid should they decide to change from Zinedine Zidane while Paris St-Germain are also admirers, although Thomas Tuchel is currently at the helm there.

Bayern Munich is a major job on the market after the sacking of Niko Kovac in early November.

Interim head coach Hansi Flick has made an impressive start and Bayern have said he will be in charge "until further notice", although there is no indication yet of a permanent deal.

Pochettino has all the credentials and the news of his sacking is sure to alert the Bundesliga giants.

Will he return to the Premier League? It is hard to see which jobs would attract him.

The next Premier League big one that might become available? Well, Unai Emery is under pressure at Arsenal.

And what of Tottenham?

Right at the front of the queue within moments of Pochettino's sacking being made public - Jose Mourinho.

The Portuguese is out of work and jobs such as Real Madrid are currently out of reach, so 'The Special One', who still has a base in London after his sacking by Manchester United last December, will be interested.

The question is whether he is Levy's type. He does not come cheap and does not work cheap - he will want the big-money signings Pochettino did not get.

And while there are other candidates - Bournemouth's Eddie Howe, former Juventus boss Max Allegri and Napoli's Carlo Ancelotti among them - Mourinho appeared to be fastest out of the blocks in the moments after Pochettino's sacking.

Mourinho in contention to replace Pochettino