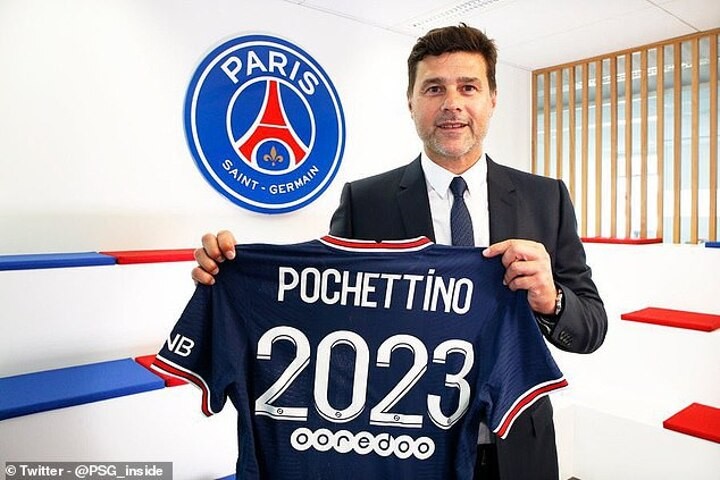 Mauricio Pochettino has signed a one-year extension to his current contract at Paris Saint-Germain.

The Argentine has only been in the hotseat at the Parc des Princes for six months having replaced Thomas Tuchel as boss in January.

The 49-year-old signed an 18-month contract through until June 2022 with the option of an extra year when he joined.

But that deal has now been extended until the following June in a summer which has seen interest in him from former club Tottenham.

Pochettino - whose staff have also been granted extensions lasting the same period of time - told the club's official website: 'I'm really very happy, for myself and also for my staff

'It's very important for us to feel the confidence of the club and we will give our maximum so that the supporters are proud of Paris Saint-Germain.

'That's why we will try and reach our objectives all together, as one. Twenty years ago I was captain of this club and today I am the coach… It's a dream come true.'

PSG president Nasser Al-Khelaifi meanwhile added: 'We are delighted that Mauricio has reaffirmed his commitment to the Paris Saint-Germain family.

'Having also captained the team 20 years ago, he understands the club values, ambition and vision for the future. With Mauricio's leadership, we're excited and confident about what the future holds.'

Former PSG captain Pochettino brought stability for the second half of last season and led the club to French Cup success in 2020-21, but could not prevent Lille from wrestling their Ligue 1 crown off them.

European glory continued to evade the French giants too, after they were beaten in the Champions League semi-finals by Manchester City.

The former Southampton and Spurs boss was also linked with a move to Real Madrid to replace Zinedine Zidane. The Spanish side have since hired Carlo Ancelotti while Nuno Espirito Santo has taken charge of the north London outfit.

But Sportsmail revealed in May that Tottenham explored the possibility of bringing Pochettino back to the club.

Spurs chiefs discussed the prospect of trying to appoint the Argentine as their new head coach, just more than 18 months after he was sacked, but PSG's desire not to let him leave appears to have won out.

Pochettino's focus will now switch to reclaiming the title, and his squad has been strengthened by the arrivals of Achraf Hakimi, Sergio Ramos and Georginio Wijnaldum.