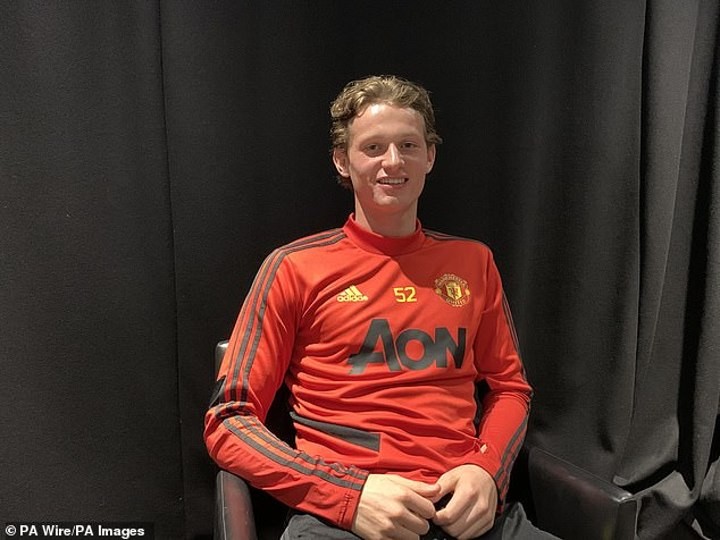 It takes a special type of person to win a place in Manchester United's first team as a young player.

First you have to earn a place in the most famous academy in English football. Then you have to fight to keep that place amid the most intense competition. Finally you have to prove you belong among some of the biggest stars in the professional game at the most scrutinised club in world football.

Imagine having to achieve all of that, and then beat cancer as well.

Max Taylor is on course to do just that.

Taylor this week signed a new contract extension with United, continuing his remarkable start to life in football - and life full stop.

He played an important role in Manchester United Under 18s' league triumph two years ago, as part of the defence in a team which also featured Brandon Williams, Angel Gomes, Tahith Chong and Mason Greenwood.

That quartet has given the Old Trafford faithful hope and a sign of a bright future as Ole Gunnar Solskjaer continues to rebuild his side with an emphasis on youth.

However, months after success within the club's youth ranks, centre-back Taylor had to stop playing football. His progress and development were curtailed and it was hard to believe he would ever follow his academy team-mates' path into the first team.

The youngster underwent a precautionary scan in the summer of 2018 and was diagnosed with testicular cancer in October of that year.

'The cyst had gone and the cancer, the lump, was actually inside the testicle, so you wouldn't have been able to feel it anyway, so it was actually a blessing,' Taylor said.

Taylor had surgery on October 4, 2018 to remove his left testicle and a month later had to undergo a nine-week course of chemotherapy after the cancer spread.

United revealed he had successfully responded to treatment in February 2019 but Taylor had to have another operation weeks later.

'That was like the low point because I was still in, couldn't really do much like things you take for granted. I couldn't even sit up because it was a cut straight through my abdominal,' Taylor added.

The 20-year-old highly-rated defender, who has been with United since the age of 14, was able to start rebuilding his fitness in May last year.

Taylor, who is a Manchester native, signed his first professional contract at the Red Devils in January 2018 and was able to train with his team-mates in the autumn of 2019.

A full year after being diagnosed with the disease Taylor stepped onto a football pitch in a United shirt as he came off the bench in United U23s' 4-1 win at Swansea.

He featured six times for the U23 team in Premier League 2 and was also named on the bench alongside a host of academy players for United's UEFA Europa League match away to Astana in Kazakhstan last November.

Hailed as an 'inspiration' by former United manager Jose Mourinho and current boss Solskjaer, Taylor's career is now back on track after beating cancer.

Tottenham boss Mourinho was in charge of United when Taylor was diagnosed with the illness and gave an insight into his character after he was included in United's first-team squad for the first time.

'Very sweet kid, fantastic young professional and when we had the news, everybody was in shock, but I think the first one to motivate everyone at United was him,' the Portuguese said.

'I think he was the one that motivated all of us.

'You know he won the biggest match of his career, so everybody is happy.'

Taylor will now be setting his sights on winning games with the Red Devils after agreeing a new one-year contract extension at the club on Wednesday.

He had been sent out on loan to Northern Premier League outfit Stalybridge Celtic back in January and made nine appearances before the Covid-19 pandemic brought a halt to the season.

'There's a lot of people out there who think, like I did, that people only remember them for having cancer,' Taylor said. 'They'd be like "ah, that's what you've done, you're amazing to get out of that".