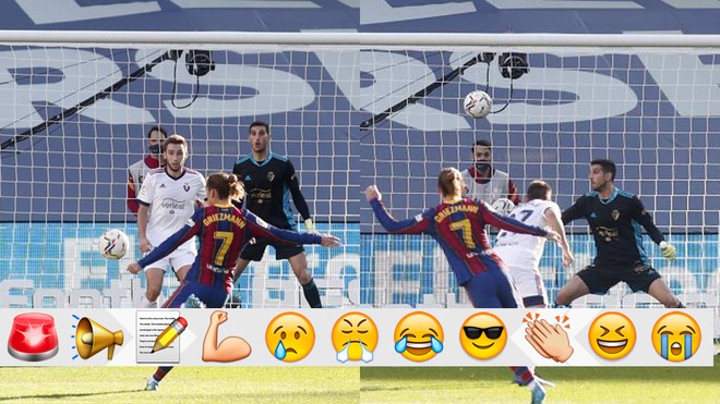 Barcelona thrashed Osasuna 4-0 on Sunday to pay tribute to Diego Maradona, with Lionel Messi leading the way on the pitch and producing a special moment when he revealed a Newell's Old Boys shirt.

Antoine Griezmann was impressive too, keeping up the good form he has shown since his interview with Jorge Valdano at the start of the week.

Griezmann has had a good week, since opening up about some of his struggles at Barcelona in an interview with Jorge Valdano.

After that interview was broadcast, the Frenchman scored in Ukraine against Dyanmo Kyiv and then also netted against Osasuna this Sunday, firing in a thunderous volley.

Maybe it'd be better for Barcelona if he were to speak every week or if he'd done so sooner.

Messi paid tribute to Maradona with a special left-footed goal.

After celebrating with his teammates, he revealed a Newell's Old Boys shirt with the No.10 on the back of it for a tribute that will be shared around the world.

This was a calm afternoon for Barcelona with a clean sheet included, although there was the bad news of Clement Lenglet's injury.

Jagoba Arrasate had said that Barcelona were playing better than their recent results had suggested and it seems the Osasuna coach was right.

The plague of injuries has continued and it's really hurting Barcelona at the centre-back position.

It remains to be seen just how serious Lenglet's issue is, but he now joins Gerard Pique, Ronald Araujo and Samuel Umtiti on the injury report.