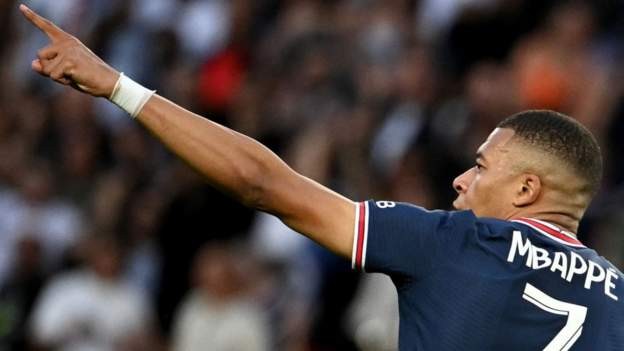 Kylian Mbappe celebrated signing a new three-year Paris St-Germain contract in style by scoring a hat-trick in the champions' final Ligue 1 game of the season.

After announcing pre-match he had turned down a move to Real Madrid to stay in Paris, the striker was at his best as PSG relegated Metz.

Brazilian Neymar was also on target, scoring his 100th goal for the club.

Angel di Maria completed the scoring in his last appearance for PSG.

The Argentine has been with the club for seven years and has been linked with a move to Juventus.

The result sent Metz into Ligue 2 along with Bordeaux, who were relegated after 30 consecutive years in the top flight despite a 4-2 win at Stade Brestois as they finished bottom of the table.

St Etienne salvaged a 1-1 draw at Nantes to finish 18th and set up a relegation/promotion play-off with Auxerre.

Mbappe, 23, who won the 2018 World Cup with France, had been heavily linked with a move to Spain before committing his future to PSG.

Spain's La Liga has reacted angrily to the news, calling the deal "scandalous" and announcing it plans to file a complaint to Uefa as well as French and EU authorities.

Attempt missed. Danilo Pereira (Paris Saint Germain) header from the centre of the box misses to the left. Assisted by Kylian Mbappé following a corner.

Vincent Pajot (Metz) wins a free kick in the attacking half.

Fali Candé (Metz) wins a free kick in the defensive half.