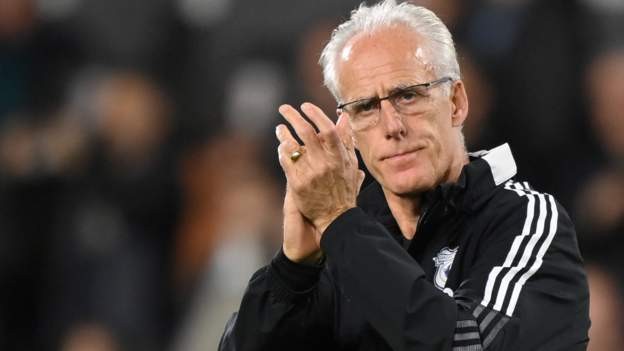 New boss Mick McCarthy says substance is more important than style in Blackpool's bid to avoid relegation from the Championship this season.

The Seasiders appointed the veteran to succeed Michael Appleton, with the club 23rd in the table, with just six wins from 27 games, and 26 points.

McCarthy's mantra of hard work and organisation is how he sees the club turning around their fortunes.

"You've got to be prepared to work hard, and if we don't then I'll be under the cosh. We just need to get out of it, I'm long enough in the tooth and pragmatic enough to know that.

"Are we the best football team in the league and are we going to go out and wipe the floor with everybody? I doubt that very much. I'm not bothered who you put in charge.

"My old man used to say: 'Nobody will ever fall out with you if you work hard, Mick. You might not play well every week but they can't say you didn't try'."

The Barnsley-born 63-year-old's last spell in management, at Cardiff - which ended in October 2021 - initially brought about an instant turnaround in form, leading the Bluebirds from 11th to an eighth-placed finish.

He has previously been a success at second-tier level with Millwall, Sunderland, Wolves and Ipswich, taking all four to the play-offs and in the case of the middle two, promotion.

While the task is a different one at Blackpool in terms of fighting at the other end of the table, the secret behind success is a solid backbone.

"I watch Arsenal play now, and they are fabulous to watch but they're not a soft touch anymore," McCarthy added.

"Draw 2-2 at Manchester United and go and win the games 3-2, that's having some... that's what they've got now, they were always a good footballing team, they're probably better now but they've got the other side of it.

"I tell all the good players I've ever had: 'Who are the best teams? Arsenal, Manchester City, Liverpool etc. What do they do better than everybody else? They work harder'.

"(City's) Bernardo Silva covers about 14km every week. He's unbelievable. They stop their opposition playing as well, as well as being a good footballing side."

Although the former Republic of Ireland captain, and manager, has enjoyed the break from management - "spending lots of time with the grandkids" - there was always a desire to return to the fold when the opportunity presented itself.

This year marks his 31st in management since he took charge as player-boss at Millwall, with plenty of changes along the way.

"In some respects, it's a lot harder now because it's changed," he said. "There's more media attention. There was no Twitter, Facebook or social media that players are on.

"But then in some respects it's easier because I'm 64 coming up in February and I've got a bit more perspective on life.

"I'm not as angry, that's for sure - still angry but not as! I'm still committed and still want to win. But when I was 32 and I got into management I was wet behind the ears. There were things I didn't know I was learning."