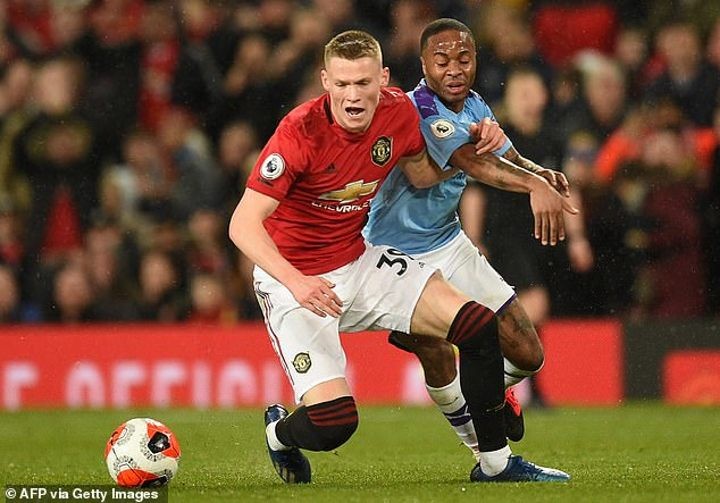 Scott McTominay has revealed he is learning to improve his game by watching clips of Patrick Vieira, Roy Keane and Zinedine Zidane.

The Manchester United midfielder came through the academy, making his debut in May 2017, and has become a key player under current manager Ole Gunnar Solskjaer.

There was even talk that he could be a candidate to win the club's player of the year honour until he was sidelined for two months due to an injury.

But McTominay has not been resting on his laurels in his time off and has admitted he has been watching former captain Keane – along with his old rival Vieira and Real Madrid icon Zidane – as he looks to develop.

He was asked to explain his position under Solskjaer on Manchester United's Box to Box show, and answered: 'For myself, someone who's quite strong and a good runner, I should be testing teams more than I do.

'I should be breaking lines similar to what Paul [Pogba] does, drive into the box and create chances.

'We always have to have that balance of one goes and one sits, which is so important for a midfield player. Being box-to-box, there's some amazing examples: Zidane, Patrick Vieira, Roy Keane, driving through the middle of the pitch and were exceptionally good at it.

'For me it's important to keep watching clips like that, I get the guys to send them over as much as they can to analyse it.'

McTominay could be threatened by the return of Pogba to full fitness ahead of the Premier League's mooted restart on June 17 – after the January arrival of Bruno Fernandes.

But the 23-year-old has no fears over the challenge ahead of him.

'Obviously whenever you play with Paul he's such a talented footballer and he's such an amazing guy as well, so for me it helps me a lot,' he said.

'We've had that a lot this season and I feel like we've started getting real partnerships all over the pitch in midfield. Competition is healthy that's what it's all about but obviously playing with Paul is amazing.'