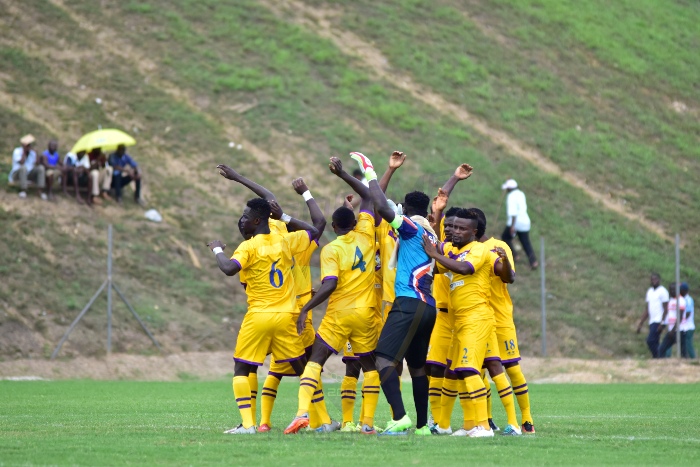 Medeama have arrived in Tarkwa after their Ghana FA Special Competition match against Aduana Stars was overshadowed by crowd trouble, the club has confirmed.

The two teams settled for a pulsating 1-1 draw at the Nana Agyemang Badu park on Wednesday, but not without controversy.

Irate fans descended on referee Emmanuel Eshun and his two assistants, as play was interrupted severally during the crunch tie at Dorma Ahenkro.

Marauding thugs threw missiles targeted at the match officials and the opposing team, leading to officials running for cover on the pitch over claims of unfair officiating.

The Match Commissioner and the bench of the opposing team were hit with several stones from the stands, with the assistants referees not being spared by the violent attack.

The police appeared helpless as  a battalion of marauding goons held the match officials hostage for several hours after the game.

But the Mauve and Yellows have confirmed via twitter that the team has arrived in Tarkwa safely after over a 7 hour journey.

We are back home safely in Tarkwa after our @ghanafaofficial Special Competition match against @AduanaStarsFc was marked by crowd trouble.

The match ended 1-1 in regulation time at the Nana Agyemang Badu park.

We are grateful for the numerous concerns.

The reigning Ghana Premier League champions could be slapped with a stadium ban or hefty fine.

The game between the Fire Club and the Mauve and Yellows ended in a 1-1 draw at the Nana Agyeman Badu park.

The visitors drew the first blood in the 10th minute through forward Touissant Dedy Kalibo who got his second goal in four days.