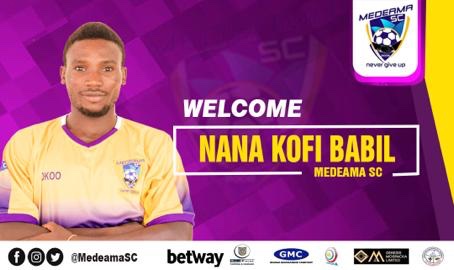 Medeama SC have announced the signing of striker Nana Kofi Babil ahead of the 2019/20 Ghana Premier League season.

The young forward joins the Mauve and Yellows from lower tier side Charity FC on a three year deal.

Babil is expected to boost the firepower in the attack of the former FA Cup winners for the new campaign.

The Tarkwa based club have been busy during the off season, making several new signings and engaging in a number of preseason friendlies.

The striker's arrival was announced together with the signings of Desmond Gyabeng and Joseph Cudjoe.

Striker Nana Kofi Babil is the latest to join @MedeamaSC on a permanent contract.

He joins the Mauve and Yellow on a three-year deal from Accra-based Charity FC.