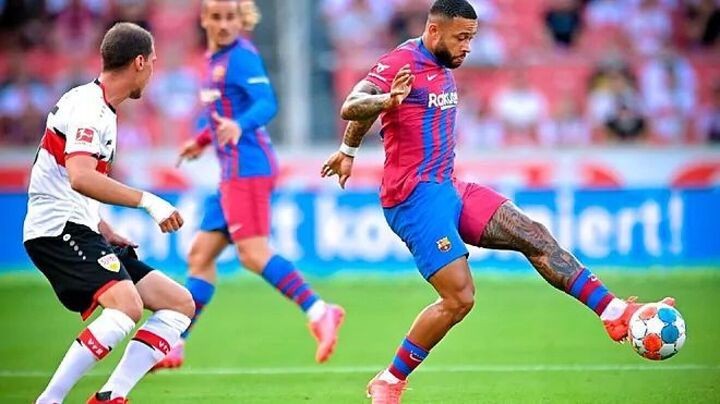 Following several days of pre-season workouts in Germany, the Blaugrana tested themselves against Bundesliga opposition at the Mercedes-Benz Arena and they put on a show, scoring three times and creating several other chances.

There wasn't much goalmouth action at either end at the beginning of the game, though, with the most interesting moment of the opening 20 minutes a half-hearted and quickly dismissed Memphis penalty shout.

But, the Dutchman didn't need a spot kick. In the 21st minute, Barcelona took the lead when Memphis latched on to a perfect chip over the Stuttgart defence from Frenkie de Jong. The Dutchman controlled perfectly, dinked the ball over a defender and smashed it past Fabian Bredlow in the German side's goal.

The new arrival then helped set up a goal in the 36th minute, with Memphis flicking the ball into - a probably offside - Griezmann's perfectly timed charge into the box and with the Frenchman crossing for Yusuf Demir to knock into the back of the net.

That gave Barcelona a 2-0 half time lead. That and Gavi's excellent intervention to cut out the final pass of a Stuttgart counter attack just before the break.

The start to the second half was slower, but Barcelona upped the ante again once Ronald Koeman made some personnel changes. In the final 20 minutes, Riqui Puig was very lively as he first provoked a couple of saves before slotting a lovely Griezmann pass in off the post for Barcelona's third.

It could even have been four, only for Bredlow to make an excellent save after Miralem Pjanic played pre-season star Rey Manaj through on goal.

It finished 3-0, then, to Barcelona and that makes it three wins from three so far in their summer friendlies. More important than the result is the sense that Memphis and Griezmann can play together. If the Frenchman ends up staying at the Camp Nou, they could form quite a partnership.