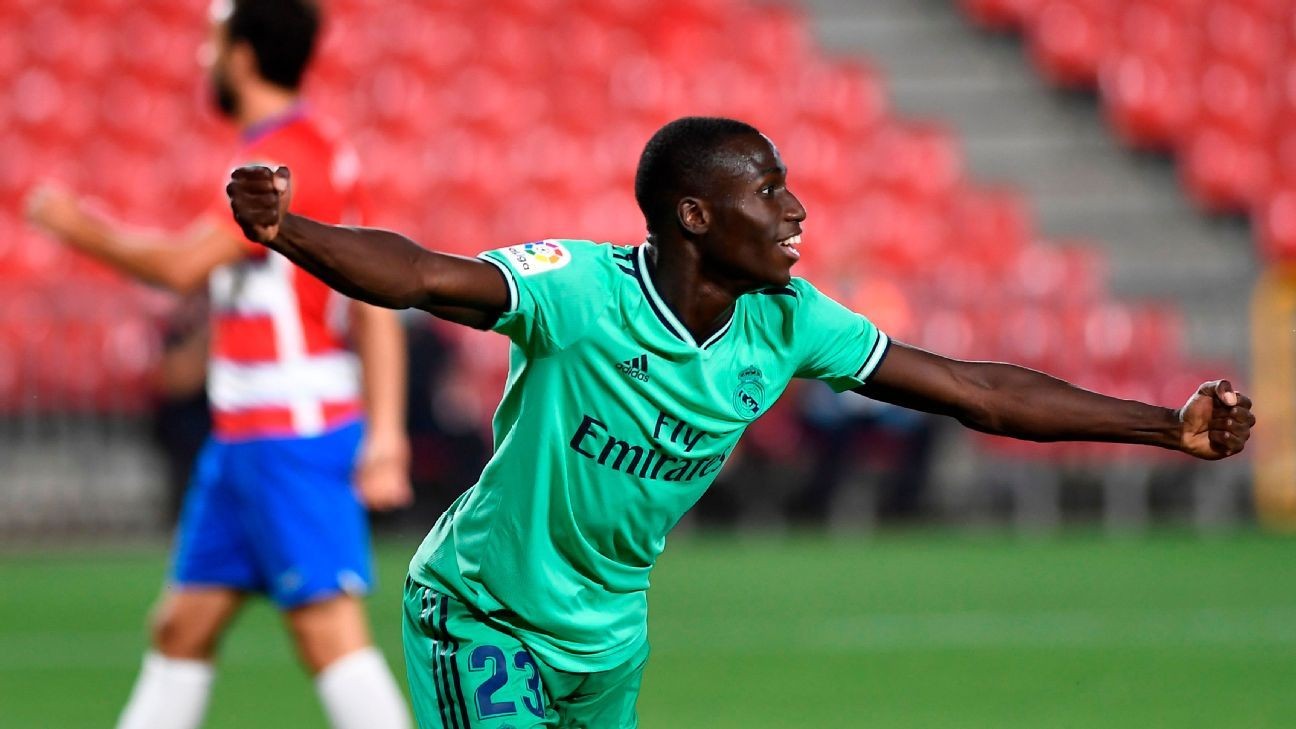 Ferland Mendy and Karim Benzema scored early as Real Madrid beat Granada 2-1 on Monday night to restore a four-point lead over Barcelona at the top of La Liga with two games to go.

Left-back Mendy opened the scoring with 10 minutes gone, bursting into the box and firing high past Granada keeper Rui Silva from a difficult angle. Madrid doubled their lead with a flowing move five minutes later, Isco's backheel releasing Luka Modric, who played in Benzema for a curled finish. Granada were much improved after half-time and Darwin Machis pulled a goal back, shooting through the legs of Thibaut Courtois, but Madrid held on for their ninth win in a row.

In a week when Madrid play three matches in seven days, it was important to take the lead early on. Up 2-0 with 15 minutes played, Madrid could then look to conserve their energy and make the hosts chase the game, even if things got much more complicated later on.

This match showcased Madrid's strength in depth, too. Mendy's goal means it's now 21 different scorers in La Liga this season. Zinedine Zidane had seven talented forwards -- Eden Hazard, Marco Asensio, Vinicius Junior, Rodrygo, Gareth Bale, Lucas Vazquez and Brahim Diaz -- on the bench, an array of talent that no other team can match.

Conceding after the break meant the second half was much more taxing than Real Madrid would have liked, and there were some nervous moments. Their defensive record has been so impressive -- with six clean sheets out of eight going into this game -- and they would have loved to keep that record going.

7 -- Zidane made four changes to the side that beat Alaves on Friday with Sergio Ramos and Dani Carvajal returning from suspension in defence and Federico Valverde and Isco coming into midfield. It was the first time since February (and a 1-0 Madrid derby win) that Zidane had picked five midfielders, a tactical setup worked like a dream in the first half when Granada's players were left chasing shadows. The team suffered in the second half, though, and Zidane didn't quite seem to know how to react.

GK Thibaut Courtois, 8 -- Disappointed to be beaten by Machis for the first goal Madrid have conceded in more than 500 minutes. A good early save from Domingos Duarte, and busy later on to maintain Madrid's lead.

DF Dani Carvajal, 7 -- Got forward often in the first half, having one shot blocked. Sat back more as his teammates did the same after the break.

DF Raphael Varane, 7 -- An increasingly frantic night for Real Madrid's defence. Granada like to play direct football and Varane was important in dealing with their aerial threat.

DF Sergio Ramos, 8 -- An absolutely vital clearance off the line with five minutes to go that helped earn the three points.

DF Ferland Mendy, 8 -- Scored his first Real Madrid goal with an extraordinary finish. Did his bit in defence too, with one important header just before half-time. Mendy is having a very impressive end-of-season run.

MF Casemiro, 7 -- Started the move that led to Madrid's opening goal, but lost the ball ahead of Granada's with an uncharacteristic error. Not as assured as he has been in recent weeks.

MF Federico Valverde, 6 -- Tasked with winning the ball high up the pitch and building a platform for fellow midfielders like Modric to shine. Still not at his best since the restart.

MF Toni Kroos, 7 -- Played alongside Casemiro in a double pivot. Controlled the midfield at first, but suffered as the team did later.

MF Luka Modric, 8 -- An imperious exhibition in the first half, one of his best performances of the season, getting forward and combining with Benzema. Dropped off slightly after that.

MF Isco, 7 -- His third start in an injury-interrupted final stretch of the season. Had one early shot, had another deflected wide, and one more saved before being taken off.

FW Karim Benzema, 8 -- Scored early with a confident finish and could have had a second in an outstanding first-half performance. Helped out in defence too. Now has 19 league goals this season.

FW Marco Asensio, 6 -- Replaced Valverde with half an hour to go but struggled with the team under pressure.

FW Rodrygo, 7 -- Came on for Isco and looked a threat initially on the left.