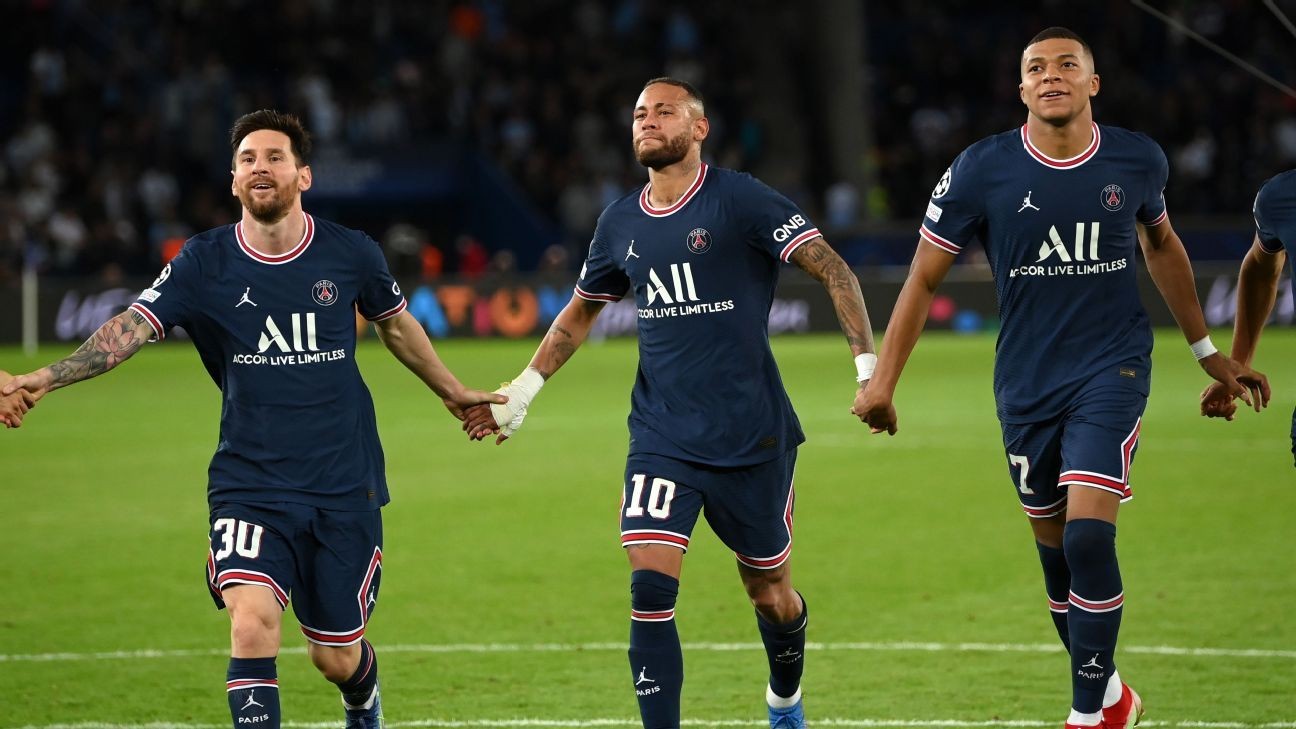 Lionel Messi said that Paris Saint-Germain and his partnership with Neymar and Kylian Mbappe will improve as they play more alongside each other.

Messi expressed the sentiment after he scored his maiden goal for PSG in Tuesday's 2-0 Champions League victory against Manchester City after the Argentine's stuttering start to the season.

Messi had been unconvincing in his first three appearances since joining on a two-year contract after leaving Barcelona, but on Tuesday, he reminded everyone of his talent.

After a quiet first half, the diminutive forward linked up with Mbappe and found the top corner to effectively wrap up the win in the 74th minute.

Could Messi's partnership with Neymar, Mbappe hinder PSG?1hMark OgdenInside Lionel Messi's final days at Barcelona and how he ended up joining PSG48dSam Marsden and Julien Laurens

"I am very happy to have scored," said Messi, back on the pitch after sitting out two games with a bruised knee.

"I haven't played much recently. Only one game [at the Parc des Princes], this is the second one here. I am gradually adapting to my new team, to my team mates.

"The more we play together [with Neymar and Mbappe], the better it will be. We must all grow together, increase our level of play. We played well. We have to give our best and continue to do so."

His goal sent the Parc des Princes crowd into raptures and prompted a rare celebration from coach Mauricio Pochettino.

"I've spent 20 years watching him score goals from the other side of the opposite pavement and it's the first time he scores for a team I manage so I had to celebrate," Pochettino said with a smile.

"You need this type of performance and players like him need to feel the back of the net. He needs to create links within the team after 20 years in Barcelona. He's feeling different things, there's a lot of new feelings for him."

City manager Pep Guardiola, who coached Messi at Barcelona from 2008-12, said his team played well but that it was impossible to keep a lid on a players like Mbappe, Messi and Neymar.

"We cannot control them for 90 minutes. The only way I know -- there are two ways actually, is first defend and pray, and the second is to have the ball and create and that's what we did. But we have to create more and be more aggressive," the Spaniard said.

"I wish [Messi] the best, I hope that he's happy and enjoying it here. He made me so happy when we were together."