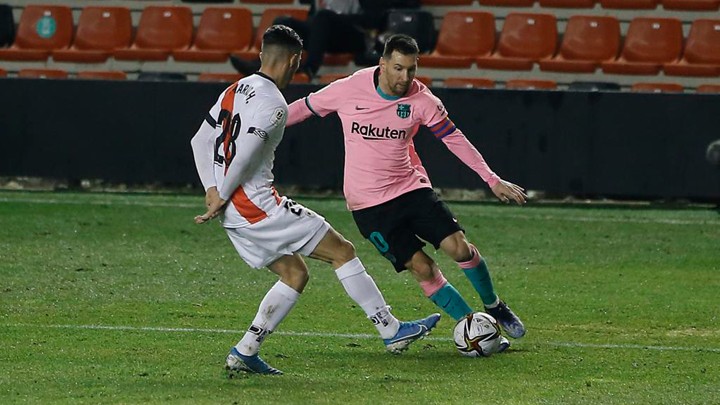 Lionel Messi was back in the Barcelona line-up for their Copa del Rey match away at Rayo Vallecano on Wednesday night, scoring in his side's 2-1 win to book their ticket to the next round.

Ronald Koeman wants to win this competition and put Messi back in the line-up, with the Argentine available again after serving his post-Supercopa two-match ban.

It wasn't Messi's best game and the overall play was being run by the midfielders Frenkie de Jong and Riqui Puig, but nobody was able to finish in front of Rayo Vallecano goalkeeper Stole Dimitrievski. The shot-stopper either saved or the efforts hit the woodwork, something that happened three times.

Messi, though, then appeared to unblock this Barcelona side and to clear the way.

After Barcelona fell behind, Messi finished well at the back post after a good pass from Antoine Griezmann, before he helped created the go-ahead goal by feeding Jordi Alba, who in turn set up De Jong.

Messi could even have added a third, but failed to fire into the net after dribbling his way around several legs inside the Rayo Vallecano box. But, considering he hadn't played in a week and a half, he overall looked sharper than some might have expected.

A special relationship with Vallecas

It was a happy return to Vallecas to face Rayo Vallecano, who haven't been in LaLiga Santander since the 2018/19 season but who have been a regular top division side during the Argentine's career.

Messi now has nine goals in the Madrid neighbourhood from six visits, while his total record against Rayo Vallecano is 18 goals over 11 matches.

With his strike on Wednesday night, Messi now had 54 Copa del Rey goals over his career and is fifth on that table, one that is led by Telmo Zarra's 81.