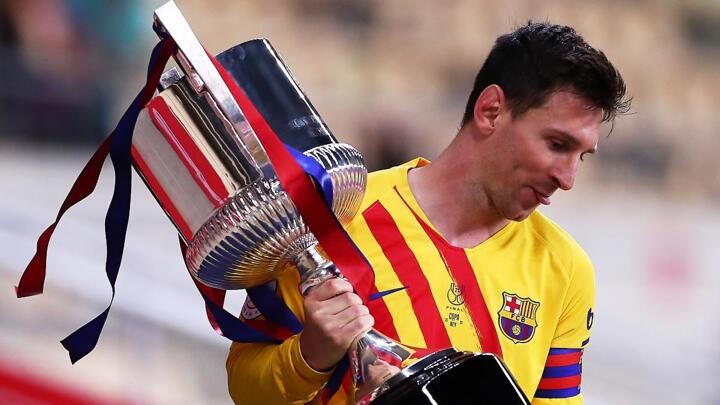 Lionel Messi scored twice to help Barcelona to Copa del Rey glory and Joan Laporta is hopeful the forward will remain at the club.

Lionel Messi hailed the special achievement of captaining Barcelona to another trophy as president Joan Laporta backed the superstar forward to sign a new deal with the club.

With that double, the six-time Ballon d'Or winner made it a record nine goals in 10 appearances in the final of the competition to overtake Athletic great Telmo Zarra.

He has now scored the fourth most goals ever in the competition (56), meanwhile, behind Guillermo Gorostiza (64), Jose Samitier (69) and Zarra (81).

Messi's future remains a hot topic of debate with his contract due to expire at the end of the season, potentially making this seventh Copa triumph his last for the Catalan giants.

"It is a very special cup for me to lift"

Barça were made to wait until the hour mark to find a way past opposition goalkeeper Unai Simón, but Messi is glad his side's patient approach to breaking down Athletic paid off.

"It's nice to lift a title. It's a very happy day for this group," Messi said. "It is very special to be the captain of this club. It is a very special cup for me to lift.

"We knew Athletic played this way, with a solid 4-4-2. We had patience with the ball and created spaces. We moved a lot in the first half and I think they fell in the second half.

"Not being able to celebrate it with our people, it's a shame. The situation is what we have to live in. The cups are always special and people enjoy them a lot."

Barça have enjoyed an upturn in form since the turn of the year and are two points off top spot in LaLiga, despite defeat to Real Madrid in last week's Clásico.

"It was difficult for us in the first half of the year. We lost a lot of silly points," Messi added. "Then we became strong, very good, and we got into the title fight. Last week, unfortunately, we couldn't get a good result from the Clasico."

Messi, who has now hit 30 or more goals for Barça in 13 successive seasons, has been touted as a possible target for Manchester City and Paris Saint-Germain.

Laporta: "I am convinced that he wants to stay"

However, recently elected club president Laporta remains confident that the Argentina international can be tempted to stay at Camp Nou beyond the end of this season.

"Leo is the best in the world, he is deeply rooted in the club," Laporta said. "I am convinced that he wants to stay and we will do everything in our power to make him stay. Today we have seen that he is supported by a great team."

Koeman hopes for Messi stay: "We want him to continue with us"

The victory at the Estadio de la Cartuja marked the first piece of silverware won by Koeman since being appointed by Barcelona last August.

And like Laporta, Koeman is hopeful Barça's improved performances in 2021 will be enough to persuade Messi to put pen to paper on fresh terms.

"I hope it is not the last Messi's cup match with us, we want him to continue with us," Koeman said at his post-match news conference.

"You never know if it has been Leo's last final because it is he who must decide. As the president says, we will do our best to make him stay.

"He has proven, once again, to be the best in the world. With enormous effectiveness, he has led the team."