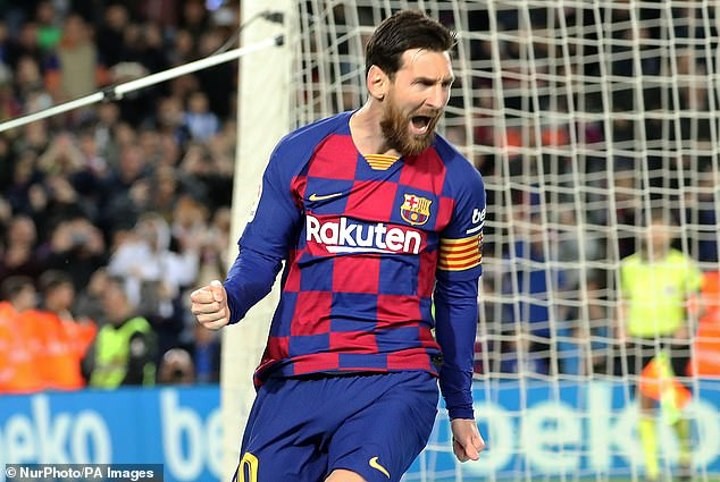 As doubts begin to be cast over the likelihood that Barcelona can really re-sign Neymar this summer – spotted this week wearing a pink suit on the front of Vogue Arabia – attention inevitably hones in on Inter Milan's Lautaro Martinez.

And it comes just as Inter were linked with a speculative move for Lionel Messi. If one of the two Argentinians move this summer to join the other, Martinez's arrival at the Nou Camp looks far more likely than Messi's in Milan. In truth, the six-time Ballon d'Or winner going the other way was never going to happen.

Inter's former owner Massimo Moratti rolled the grenade under the Barcelona boardroom door earlier this week when he said: 'It [the signing of Messi] was not an impossible dream before the coronavirus and I think if there was an effort made by the owners of the club they could still bring him to Inter.'

The grenade still had the pin in it and it was lobbed back at Moratti by those pointing out – that's easy for you to say, you're not in charge anymore.

It wasn't long before Moratti was clarifying his position reminding everyone of exactly that. 'It's my dream as a fan,' he said. 'Just a fan. I'm not in charge of the club anymore, I just go to the games as a supporter. I have not spoken to anyone about this matter. I've always liked Messi. I always followed him when I was president. But I repeat: my comment was as a fan not a director.'

The possibility of Messi moving is never far from the agenda, no matter how speculative, and Moratti's comments had provoked a question asked to president of LaLiga Javier Tebas in midweek.

'I don't know if Messi will continue in Spanish football or not. I don't think he will leave,' he said.

Asked if he believed it would be a good solution to the financial problems that await Serie A when football restarts he said: '[Italy getting him] would not be the solution to its crisis.'

In the same interview, Tebas defended Financial Fair Play and demanded the rules around clubs spending more than they have not be relaxed. That might be the only way Inter could afford Messi, who wouldn't move for any shift downwards in his 40m euros (£35m) net wage.

Tebas was dismissive of the idea that Messi leaving would hurt LaLiga. He said: 'I would like to have him in this league, but the same happened with Cristiano Ronaldo. Everyone said we would have a drop in television money when he left but we are growing in respect to the rest of the world. We have growth and we don't have Ronaldo. It [having a superstar] can help but it is not indispensable.'

Forget what he does on the pitch for a moment. If the club is to plug the hole in its finances created by the reduction to zero of its merchandising, ticket sales and stadium museum. And if it is to have any hope of finding the mythical naming rights partner who will ride over the horizon with 200m euros (£175m) in investment to help pay for the re-modelling of the stadium, then the club will want to hold on to Messi for as long as they can. Especially as his departure this summer would earn them zero in terms of transfer fee.

Messi, of course, knows all this. He holds the cards. He would be a massive weight off the wage bill but the negative impact on Barcelona's commercial pulling power would far outweigh that.

Relations between the Barcelona icon and board have nose-dived this season. Eric Abidal's comments blaming the squad for sacking Ernesto Valverde; the hiring of a social media firm who were then responsible for negative stories about his close circle; and the mud-slinging over whether or not the players were willing to take a pay-cut have all corroded a relationship that wasn't particularly strong before.

But the two will probably agree to muddle on, either with a token-gesture new contract or a passing into the final year of his 2021 deal without too much fuss or alarm. Usually the sirens would start to wail if a club's biggest players passes into his last 12 months but as Messi already has freedom to leave for nothing, then really nothing changes.

Jorge Messi, the player's father, still maintains amicable relations with Josep Maria Bartomeu. But if his son did wait until 2021 to sign a new deal then he would probably be doing it with a completely different board and that would suit Barcelona's No 10.

Moratti is not alone in wishing his club could sign Messi. But for now Inter will do well just making sure that Lautaro Martinez doesn't move to Barcelona to join him.