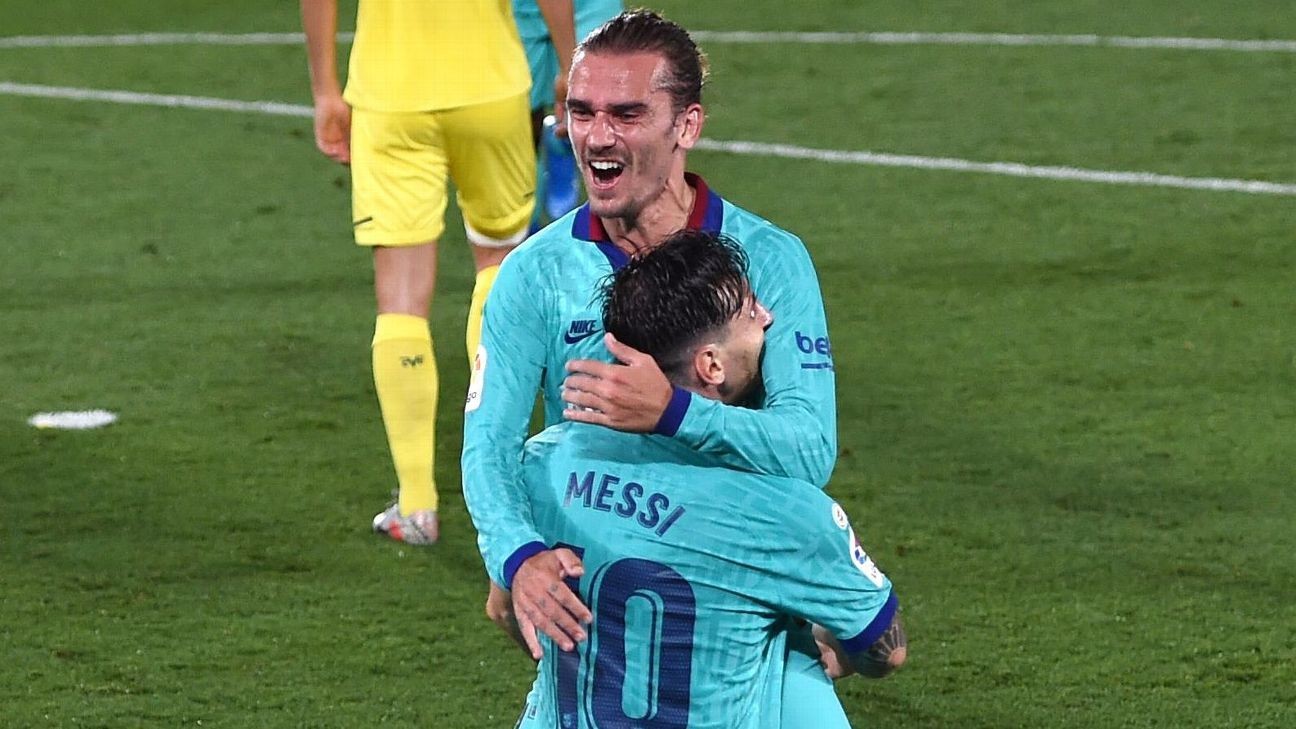 The neat little trick via which Lionel Messi has re-invented Antoine Griezmann, opened the door to the previously "closed" society he enjoyed with Luis Suarez and turned the French World Cup winner into a productive Barcelona striker is the same one which the Argentina star has previously produced to great effect.

Griezmann's change of position from lost, frustrated and mismanaged out on the wing has resulted in two consecutive performances when he's had the wit, brio and inventiveness to score, assist and generally perform like a top-class forward again. And Messi is the architect.

Whoever you support, you'd have to be poisoned by envy not to gaze in outright admiration for the Messi backheel at Villarreal which Griezmann lob-wedged neatly over Sergio Asenjo for Barcelona's third goal at the weekend. It was one of the most beautiful goals of the 29-year-old's career.

In that match his aggressive movement in the six-yard box had already helped cause Pau Torres' own goal which gave Quique Setien's team, desperate not to lose more ground on Madrid, a 1-0 lead (Barca would go on to win 4-1). Then, having looked sprightly and insistent against an Espanyol side throbbing with defensive gristle and often using 10 men between Barcelona and Diego Lopez's goal, came an even bigger breakthrough. A little sprint into the box? Sure, Griezmann's done that all his life. But the key, this time, is that he's given the ball.

We need to be honest here. Jordi Alba loves to link with Messi. Only Suarez, in recent seasons, plays with, and understands, the Argentine better than Alba. The galavanting wing-back has often, consciously or otherwise, treated Griezmann as something of a hindrance. Sometimes there seemed to be a thought-bubble over Alba's head which read: "This guy's not Neymar... he gets in my way... and if I exchange passes with him then Messi's gonna receive the ball a second or two later than we want.... get OUT of my way!"

This time, however, Alba recognised Griezmann's changed status. He's had the green light from both Suarez and Messi. Against Espanyol, the only goal of the 1-0 win came because that little darting run which the Frenchman makes is instantly, instinctively fed by Alba with a nicely weighted, perfectly timed dink into Griezmann's path.

In the split second Griezmann, who admits that he came to Barcelona to "learn a new playing system" and to "challenge myself," backheels the ball it MIGHT be that he's aiming for Suarez. The Uruguayan is nearer the space into which Griezmann cleverly clips the ball with his back turned -- but Messi is on the prowl, he's quicker than Suarez and it's his shot that Griezmann sets up. Let's give the fella some generous credit. Let's just say that Griezmann knew he was backheeling the pass to Messi.

Although the fact that Suarez actually scores is by far the key part of that little vignette, it's important that Griezmann plays with one touch and, secondly, that he and Messi lock each other in a mad embrace after the ball hits the net. Never mind that some weren't quite sure how Messi and his new French play pal were getting along..... Griezmann wasn't sure either. To reciprocate a backheel scoring opportunity barely three days after Messi did him the identical footballing favour patently made Griezmann believe that he was, now, officially 'one of the gang.'

It's worth noting, too, that it's Griezmann at the weekend who lays the ball off for Messi, before the little genius draws Villarreal's defence and heels the ball into his French teammate's path for that Phil Mickelsen lob over Asenjo. But it's worth noting because Griezmann does so with just one single, exquisite touch. Not only is he learning the fabled Barca way (ironically just as it's in danger of extinction) but he's sufficiently confident to play pit-a-pat one-touch football with Messi. An important breakthrough.

Which leads me back to my original point: It wasn't Setien who suggested to Griezmann that he move off the left wing and played, as a tight partnership with Suarez, with Messi in behind them. No, that would be Messi.

Now don't any of you who've heard nonsensical rumours about Messi 'running' the club, rumours upon which he's occasionally had to pour merited cold water, suddenly think that this is proof that the doom-mongers were right. Messi isn't some martinet, behind-the-scenes Wizard of Oz figure. Not at all. Given what a gigantic asset he is, Messi is certainly someone around whose wishes the suits and the tracksuits, executives and entrenadores. may well tiptoe. If the club ticks him off, then they've created a negative energy which can fire his, sometimes, short temper. But his wish is not their command. Let's just say he deserves, and gets, firm consideration in all matters which might either hinder, or encourage, his performances and likelihood of winning big trophies.

All that said, it was Messi, after the nonsense which Setien put Griezmann through against Atleti, who decided that enough was enough. He went to both men, fellow striker and coach, and said: "The best way for this to function, the way I see things improving, is if Antoine plays as a central striker with Luis and I work in behind them in the No. 10 role." Messi understood that nobody was benefitting from the status quo. Griezmann was morose, humiliated on the bench. Neymar wasn't going to be arriving like the seventh cavalry in the summer. Whether Lautaro Martinez would, either, was looking like a hugely contentious subject. Barcelona's budget lines are, in financial terms, like seven-stone weaklings right now. Messi also clearly understood that Griezmann, four years younger than him and younger still than Suarez, had the pressing, running into space and capacity to occupy defenders which would, if things functioned, make space and make life easier for him and Suarez. It wasn't just win-win, it was win-win-win.

And just in case you're one of those whose pulse runs high at the thought of 'player power' and who's indignant with the 'See... I TOLD you Messi actually ran things' then let me remind you that this has happened before, that it worked like a treat and that Messi was a fundamental influence in catalysing what, against Espanyol, made Suarez Barcelona's third-highest all-time goal scorer. When the Uruguayan arrived from Liverpool, Messi was still accustomed to playing centrally. Whether you fancy calling it centre-forward or false No. 9 ... knock yourself out. Take your pick. The fact remains that by the time Suarez was clear of his FIFA ban and fit enough to start matches he was playing as a right winger.

The perfect example is in the 2014 Clasico which Madrid win 3-1. Barca go 0-1 up when the Uruguayan, wide right, sends a long ball over to left-winger Neymar and their centre-forward, Messi, takes Luka Modric for a walk to create space for the Brazilian's scoring shot. Fifteen days after that defeat in Madrid, Barcelona are playing in Amsterdam against Ajax in the Champions League.

- Marcotti: Will Messi leave Barca? If so, where will he go?
- Sources: Barca reassure Griezmann over future

Luis Enrique's assistant coach, Robert Moreno, takes up the story: "During the game Luis Suarez was out on the wing and Leo said to him: 'Do you want to play in the middle?' Messi strolled out to the touchline, asked Luis Enrique if he minded the switch, and the spontaneous idea started right there. Leo and Suarez combined to tell us where each of them would rather play and it brought so much success to the team. We pretty much re-organised everyone around that attacking partnership. We said to the others in the team: 'Messi is super intelligent, he's permanently analysing our rivals in-play and he'll always put himself into spaces where he wants the ball. So when Leo has the ball ... you go here, you go there, you make sure you're in that position and so on and so on.'" They won 2-0 in the Amsterdam Arena that night.

This fusion of ideas, stemming from Messi's brilliant football brain, ended six months later with Barcelona becoming the only club in history ever to win two Trebles. Suarez has talked about it too, paying tribute to Messi's vision and generosity in inviting this goal machine in the making to play as No. 9 instead of, ludicrously it now seems, wide on the right.

This isn't identical. That was a Messi and Suarez who were nearly six years younger -- quicker, more stamina and with Neymar as their third Musketeer. Griezmann isn't, and has never pretended to be, Neymar. But Messi's football smarts, in asking the coach to sanction a different positional play up front, have complemented other things which happened over the last 10 days to wrench Griezmann out of what was threatening to become a deep sporting depression.

First, kudos to his former coach, Diego Simeone. At the end of Atletico Madrid's 2-2 draw at Camp Nou on June 30 when Griezmann, who knows his ex-teammates inside-out, who was aching to have a go at Los Colchoneros, was miserable to be brought on in the 90th minute. Postmatch, Setien said he "wouldn't apologise" to Griezmann and offered the opinion that it was "difficult to find a place [for Griezmann] without destabilising the team." What a load of absolute tosh. If I was being mischievous I might point out that Messi may have been motivated to tell Setien he was changing his and Griezmann's positions simply to show the (interim I'd say) Barca coach how wrong he was.

But back to that night. Asked about the way that his former star player, had been treated by being left on the bench until there were loose change minutes left, Simeone said: "Sin palabras." Many interpreted his statement to be a discreet: "No comment." It wasn't. It was mean to mean: "I'm speechless." Another Argentine, not just Messi, knew that Griezman was being misused. That the situation was both crazy and unsustainable.

Gab Marcotti and Julien Laurens debate how Barcelona could effectively use Antoine Griezmann.

Secondly, kudos to Luis Suarez. To show that he was not going to be sunk by the experience Griezmann, perhaps unwisely, posted a picture on Instagram of him and his wife looking happy, basking cheek to cheek in sunshine as they laughed out loud. A happy image. All the idiots who yearn for anything to criticise jumped on it, all along the theme of 'he shouldn't be happy, I'm furious that he can smile at a time like this when Barcelona aren't giving him a game ... blah, blah, blah.' The very next day Griezmann posts a follow-up image of him chasing a through ball in training with an expression of determination and the message: "I like my job!"

Suarez, influential and revered in most quarters where Barcelona are supported, almost immediately posted his reply that Griezman was: "Always positive and moving forward..." Accompanied by two 'strong' emojis and two footballs, it was nothing less than 'This guy's one of mine... get off his back!'

That was massive, it was immediately followed by Messi's suggestion of the positional change and that, in turn was followed by Griezmann's best scoring performance in training when his first touch and volleys were world class.

Behind the flowing river of every success story there are many tributaries and, in this case, they are Suarez, Messi and to a minor extent Simeone.

The man who, after the Atleti game, admitted that he couldn't see how to use Griezmann without damaging Barca's XI, now has two games and two wins and a 5-1 aggregate under his belt in no small part thanks to Messi having not control of the football club, but an immensely superior football intellect. Again.