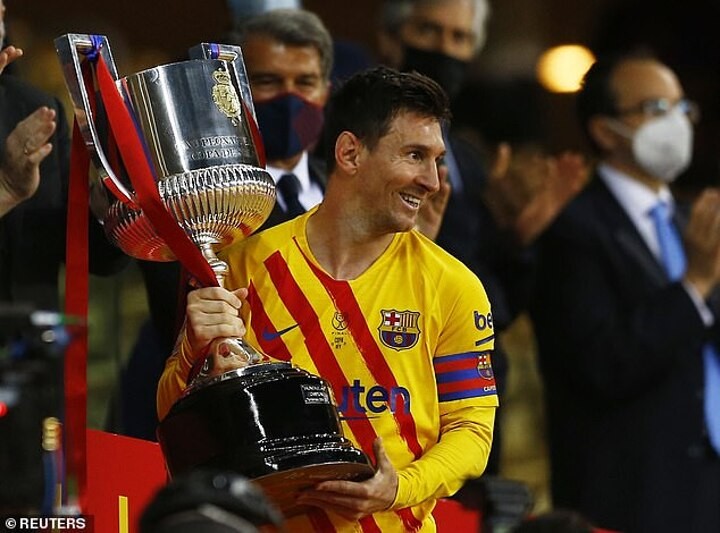 Lionel Messi hailed Barcelona’s new generation as he lifted the Copa del Rey having scored twice in the 4-0 win over Athletic Bilbao.

‘This is a different season for us, one of transition,’ said Messi. ‘We have a young squad and we have lost games at times because of a naivety and a lack of experience but we are still in the fight in the league.

‘There’s a lot of joy to win a Copa del Rey that was difficult for us this season. It’s a great night and this squad deserves it.’

Messi had not won a trophy since he took the captain’s armband at the start of last season. He added: ‘It was extra special to lift a trophy as captain of a club I have been at since I was a kid. They made it hard for us defending deep and attacking us on the break but I think their physical level dropped a bit in the second half.’

The interview was given to Barca TV and so there were no questions for Messi about his future but television reporters who had access to other players and to Joan Laporta, the club’s president, did ask about the captain’s future.

Laporta said: ‘I’m convinced that he wants to stay. This is his club. He gave an exhibition today and what’s more he’s surrounded by a great team. We will do everything in our power to make sure he stays.’

Antoine Griezmann added: ‘Messi is happy here. What happens in the summer is not in our hands. He will decide.’

Messi did lament the absence of fans and family members as he won his 35th trophy with Barcelona. He said: ‘None of our families could be here and there were no fans so it was strange to celebrate the goals without them.

‘It’s a shame that both sets of fans could not be here to enjoy it. I hope our supporters enjoyed it at home.’

Alba added: ‘The cup is for all the fans that could not be here today. We did not start the season well and not many people gave us much of a chance to win things.

‘There are a lot of new players winning their first title and I’m pleased for them.’

Barcelona had youngsters such as Pedri, Oscar Minguez and Sergino Dest winning their first silverware for the club.

Asked about Messi, Alba added: ‘It’s his decision and he’ll take it when he wants. But this is the club of his life and he’s very happy here. I hope he stays but it’s his decision.’