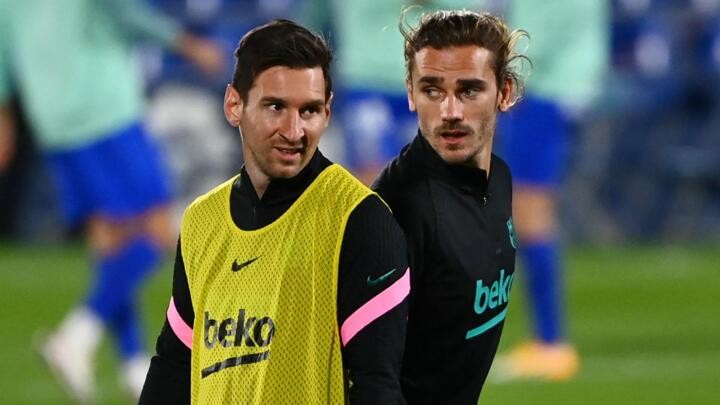 Lionel Messi is preventing Antoine Griezmann from expressing himself at Barcelona as the Frenchman continues to be overshadowed by the superstar captain, according to Arsene Wenger.

Griezmann arrived from LaLiga rivals Atletico Madrid in a blockbuster €120million transfer last year but he has struggled to establish himself alongside Messi at Camp Nou.

An unused substitute in Barca's 5-1 Champions League rout of Ferencvaros on Tuesday, Griezmann has failed to score in four LaLiga appearances this season – only managing one shot on target without creating a single chance.

While Messi has just one league goal, the six-time Ballon d'Or winner has registered seven shots on target and created six chances for his team-mates.

"Not playing at his position is complicated in the long term," Wenger told beIN SPORTS.

Griezmann may suffer in long run

"At the start, the guy accepts it but, if he does not meet his needs in the long term and he feels that the position does not allow him to express his qualities, he will become discouraged.

"Today, he is a player who must play in the centre because he has a great work rate, a precision in his passes.

"He can be dangerous with the last pass and by scoring goals, but there is congestion because he is in the range of play of Messi."

Tough start to life at Barcelona

Griezmann finished 2019-20 with 15 goals in all competitions – a tumultuous campaign which saw Barca dethroned by bitter rivals Real Madrid and humiliated 8-2 by Bayern Munich in the Champions League quarter-finals.