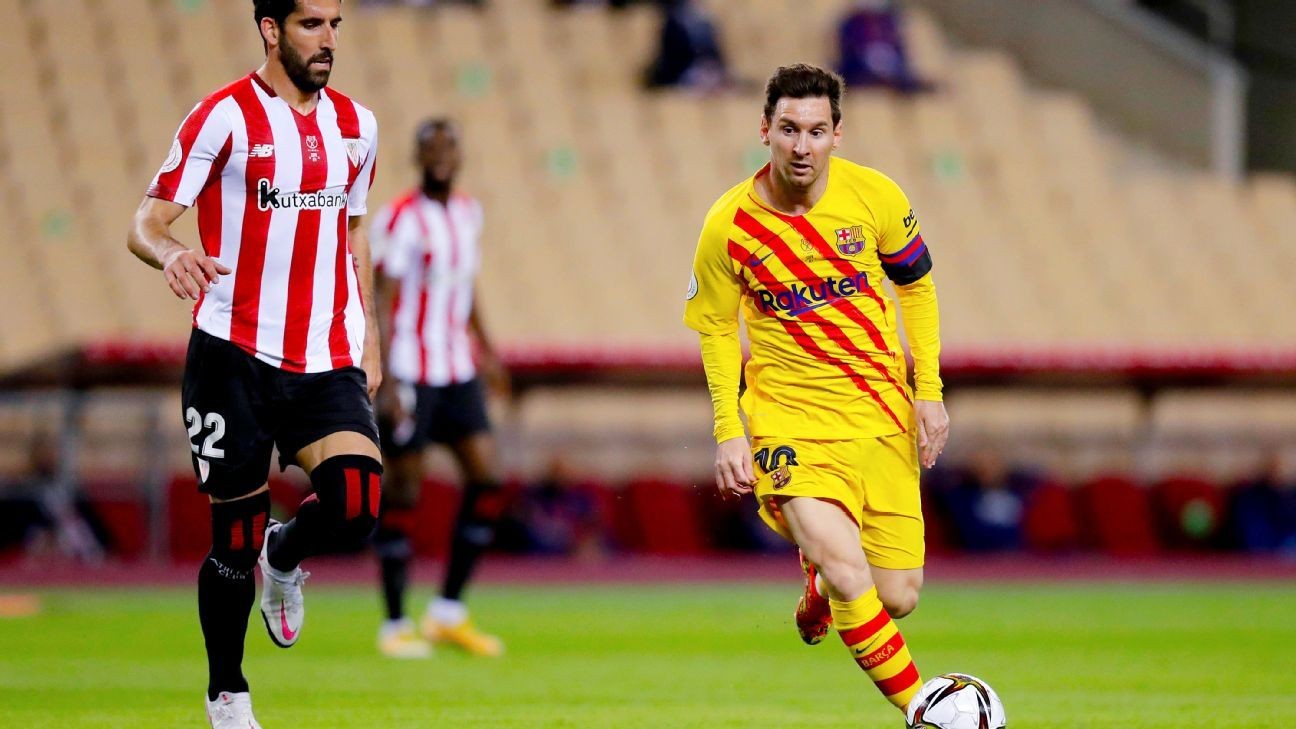 Antoine Griezmann and Frenkie de Jong were also on target as Barca won 4-0 at La Cartuja to win their first trophy since the La Liga title in 2018-19.

It was the 35th trophy Messi has won as a Barca player but his first as the club's captain and he added that he was especially proud to be able to lead the club to victory.

"I am really happy for this group of players because they deserved some happiness," he told Barca TV. "It's really special to be the captain of this club, where I have spent my whole life, and it's a really special Copa for me, to be able to lift [the trophy]."

Last season was Barca's first without a trophy since 2007-08 and ended with the 8-2 defeat to Bayern Munich in the Champions League.

That provoked the departure of several senior players, including Messi's close friend Luis Suarez, with Koeman arriving as the coach with the task of bringing through a number of young players.

The La Liga title could yet follow Saturday's Cup success, with just two points separating Atletico Madrid, Real Madrid and Barca at the top of the table with eight games to go.

play1:25Clinical Messi makes it 3-0 to Barca

Lionel Messi's fine turn and finish puts Barcelona on the brink of victory in the Copa del Rey final.

"It was a difficult year for us so to be able to celebrate this trophy and now to go for La Liga is really important," Messi added.

"More than anything, it's been a different year for us, a transition year, with a lot of young players coming in. [Now] the team's getting stronger. We've won this trophy and there's still a long way to go in La Liga. A lot's going to happen between now and the end of the season."

Messi's brace -- which took his tally for the season to 31 in all competitions -- against Athletic demonstrated his continued importance to this Barca side but could prove his last final for the club if he doesn't extend his contract beyond June.

President Joan Laporta reiterated after the game that he's "convinced" Messi will choose to stay, as he'd said on Friday, and coach Koeman hopes he's right.

"You never know [what will happen] because it's Leo that has to decide his future," Koeman said in a news conference when asked if winning the Copa del Rey could help convince Messi to stay at Camp Nou.

"As the president [Joan Laporta] has said, we will do everything for him to stay for many more years because, once again, in a final, he has shown himself to be the best in the world."

While it was a 35th trophy for Messi, it was the first for several of Barcelona's players with the club, including Griezmann, De Jong and Pedri. Koeman says he hopes the experience of winning a trophy will help tilt the title race in his side's favour.

The Dutch coach, meanwhile, saw his position strengthened at the club following doubts about his long-term future after last weekend's 2-1 defeat to Real Madrid in the Clasico.

"The only thing [I can say is] I have is one more year on my contract," he said of his future. "Everyone knows what we're doing and the changes we have made from the first day we got here.

"Sometimes [the speculation] annoys me because it changes from one day to the next and is a little exaggerated. But you have to win things at a big club like Barcelona and I understand it."