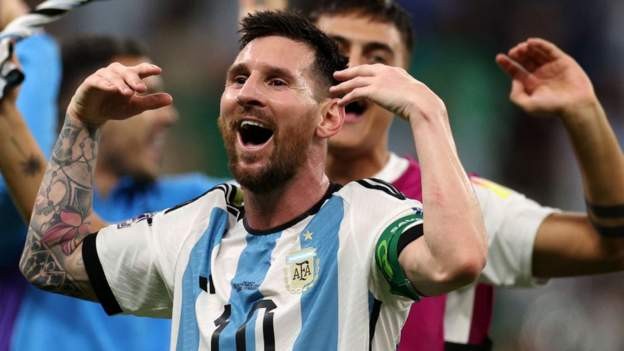 Argentina forward Lionel Messi is set to make the 1,000th appearance of his career in Saturday's World Cup last-16 tie with Australia.

He will win his 169th cap on top of 778 games for Barcelona and 53 matches for current side Paris St-Germain.

If they lose it could be the final time the 35-year-old plays at a World Cup.

"We have to be alert to everything. It won't come down to just one individual to stop him," Australia defender Harry Souttar said.

Stoke City's Souttar, who was born in Aberdeen and used to be a Scotland youth international, has been one of the stars of the Socceroos' surprise run to the knockout rounds.

"Messi has been one of the two standout players in the world [along with Portugal's Cristiano Ronaldo], and it will be a long time until we see their likes again.

"But, for tomorrow night, for 90 minutes, he's just one of the players we have to face."

Messi has scored twice at this World Cup before seeing a penalty saved against Poland.

Argentina coach Lionel Scaloni - whose side are second favourites behind Brazil to win the World Cup - has complained about his side's reduced preparation time for this game.

"Australia, who finished second in the group, played at 6pm and we finished first but played at 10pm. We went to bed at 4am and that has an impact when you have a game in 48 hours," said Scaloni, who took over after the 2018 World Cup.

"We will break our backs on this pitch to compete, we know how difficult this World Cup is, this is football."

Australia boss Graham Arnold is preparing his country for only their second World Cup knockout game ever. They lost 1-0 to Italy in the last 16 in 2006.

"It's a war, and we've got to fight that and make sure that the boys are in great physical shape, great mental shape, they've got great energy, and we go out there and give it all guns blazing."

Argentina's Angel di Maria was taken off as a precaution against Poland because of a thigh problem so may be on the bench.

Coach Lionel Scaloni must decide between Lautaro Martinez and Julian Alvarez in attack.

Australia coach Graham Arnold could stick with the same side that beat Denmark.

Full-back Nathaniel Atkinson is pushing for a recall from the ankle knock he suffered against France.

'This was the night the real Argentina stood up'Who is through in World Cup and who could join them?World Cup TV Coverage guide

Australia's only win in seven games against Argentina was in their first meeting in 1988. Current Socceroos boss Arnold played in that match. Argentina have reached the World Cup knockout stage for the ninth time in the last 10 World Cups.Messi has had 23 efforts without scoring in the World Cup knockout stages for Argentina. Australia have won consecutive matches and kept consecutive clean sheets for the first time at the World Cup. Their previous clean sheet before their two in this tournament was back in 1974.