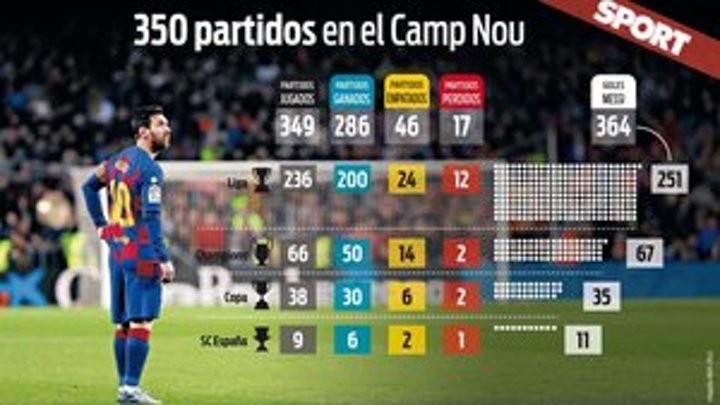 Against Getafe on Saturday, Barcelona captain Lionel Messi will make his 350th appearance in an official game at Camp Nou. Since his debut, he's played there 349 times, scoring 364 goals and setting up 128 more. Exceptional numbers which show the levels hit by the Argentine during his career.

Since then, the Barça No.10 has been scoring and making goals for fun. The greatness of. Messi throughout these years has been his consistency, regardless of competition, coach or teammates.

The six-time Ballon d'Or winner has scored more goals than games in all competitions at Camp Nou except in the Copa del Rey. In La Liga, he's scored 251 times in 236 games (200 wins). In t he Champions League, it's 67 goals in 66 games and in the Spanish Super Cup it's 11 goals in nine games. In the Copa del Rey, it's the reverse: he's played more games (38) than goals scored (35). In the game against Getafe, he will pass 28,000 minutes in a Blaugrana shirt at Camp Nou.