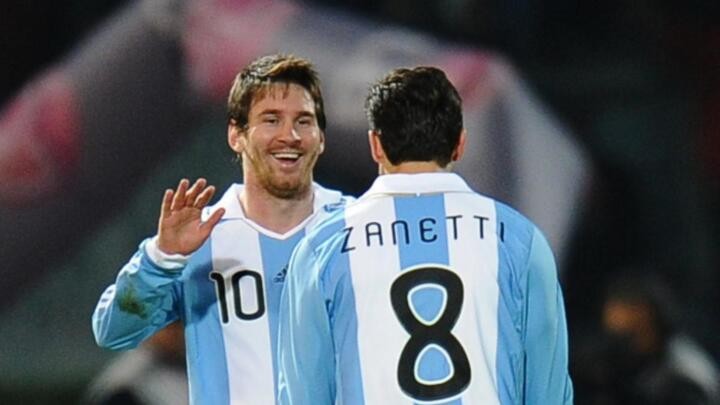 Juan Sebastian Veron does not expect Lionel Messi to sign for Inter, but he admits Javier Zanetti could well change that.

Lionel Messi is free to negotiate a move to clubs outside LaLiga and Juan Sebastian Veron thinks Javier Zanetti will be key to Inter's hopes of signing the Barcelona superstar.

Six-time Ballon d'Or winner Messi is in the final six months of his contract at Camp Nou, having failed to engineer a move away during the close season.

The 33-year-old has long been linked with a switch to Serie A giants Inter, where his former Argentina team-mate Zanetti – the Albiceleste's most-capped player of all time – is vice-president.

Former Nerazzurri and Argentina midfielder Veron does not expect Messi to be at Inter next season, but believes it will be down to Zanetti if he does complete a move to San Siro.

"I don't think he can go to Italy. If he will, it is because of Javier Zanetti, who knows him and will try to talk to him, making him feel important again and to explaining the future projects of the club," Veron told Stats Perform News.

"At the end of the day it is purely Messi's decision. But if Inter want to make an attempt, they have to use seduction and get to his heart to draw him near.

"I don't know how many more years Messi wants to play at this level, but if you want to sign him, Inter have to make Messi their flagship and make clear they want to be at the top level."

After a 2-0 victory over Juventus on Sunday, Inter sit second in Serie A three points behind leaders Milan.

No forward in Serie A to have played at least 10 games this season has had more Opta-defined 'big chances' than Lukaku, whose tally of 20 is only matched by Edin Dzeko and Cristiano Ronaldo. The Belgium international has the best conversion rate of the trio, scoring from 12 such openings for a 60 per cent success ratio. Ronaldo is second on 55 per cent, while Dzeko is third on 35 per cent.

Messi has scored 11 goals and assisted two more in LaLiga this term, while converting 58.3 per cent (seven out of 12) of his big chances.

The Barcelona captain's 35 key passes are only bettered by Iago Aspas (37), and his 100 attempts on goal in the Spanish top flight this season are almost twice as many as Karim Benzema (51) in second.