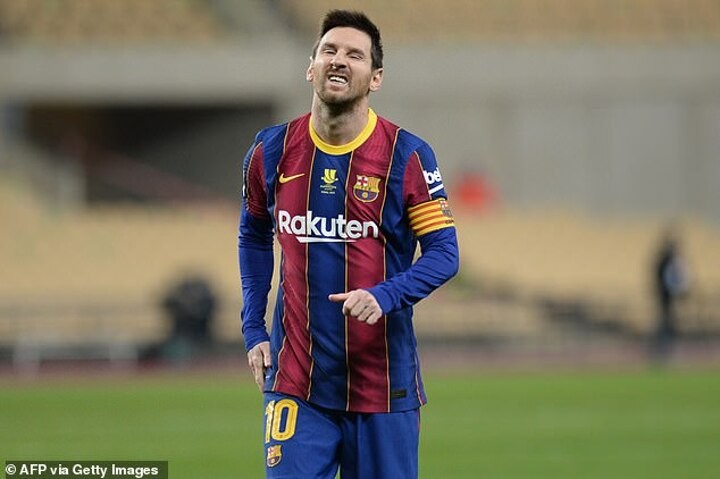 Lionel Messi 'may prove too expensive for even super-rich Paris Saint-Germain' if the Argentine star does move away from Barcelona this summer.

Messi, 33, would be available to sign on a free transfer because his contract expires at the end of June but his £500,000-a-week wages could prove prohibitive for potential suitors.

PSG sporting director Leonardo has made clear his club's interest in signing Messi if he decides to leave Barcelona but his ambition could come up against hard economic reality.

According to Gazzetta dello Sport, PSG's owners, Qatar Sports Investments, have their doubts about whether they could afford him.

That's despite PSG being ranked as the fifth wealthiest club in world football on the latest Deloitte list with a value of around £560million.

While funds would be available from Doha for the project, PSG are wary of breaking UEFA Financial Fair Play rules.

The French champions have been hit hard by the Covid-19 pandemic and matches being played behind closed doors, as well as the collapse of the Ligue 1 television deal.

PSG manager Mauricio Pochettino has revealed he once came close to working with a teenage Messi when he was Espanyol manager. The club may have taken him on loan but an excellent display in a pre-season fixture persuaded Barcelona to bring Messi into the first-team fold.

'Messi to PSG? No comment. When I was at Espanyol or Southampton, my dream was the have the best players at the club and Messi came close to being loaned out to Espanyol,' Pochettino told El Larguero.

'The deal was well advanced but he delivered a great display at the pre-season Trofeo Gamper and that was the end of that.

'We've met over the years in places such as London or Italy. We both share the love for Newell's, as we both came through their academy and that is our common bond.'

Pochettino was reluctant to speak out of turn about the chances of Messi moving to Paris.

'I'm aware of all that is going on [with Messi]. I've been watching everyone from West Ham to Valladolid and these days you need to keep your eyes on every team,' he added.

'I really don't want to talk about Messi as everything then gets blown out of proportion.'

Earlier this week, Leonardo said the French giants have a 'place reserved' at the table for Messi.

'Great players like him will always be on PSG's list,' he admitted in an interview with France Football.

'Now is not the time to discuss or even dream it. We are seated at the table of those keeping tabs on it. In fact, not seated, but with a place reserved - just in case. Four months is a long time.'

Messi has scored 14 goals and contributed six assists in 22 matches for Barcelona so far this season.