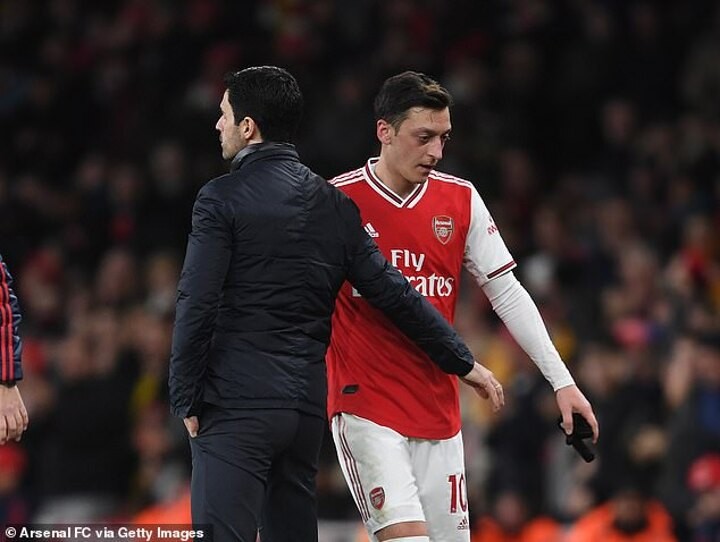 The club Mesut Ozil describes as the 'Real Madrid of Turkey' could certainly do with some Galactico magic.

Fenerbahce haven't won the Super Lig since 2014, which constitutes a long drought by their exalted standards, and slumped to a miserable seventh-place finish last season.

That meant a second consecutive season without European football for a club which had come to take continental adventures for granted over many decades.

Not being in the Champions League or the Europa League this season has eased the fixture schedule for Fenerbahce and they're currently neck-and-neck with Istanbul rivals Besiktas at the top as a result.

If they can get a deal for Arsenal outcast Ozil concluded this month, the playmaker could easily give them a decisive edge in the title race if we see even glimpses of his best football.

Back in the summer of 2019, when the Ozil to Fenerbahce rumours first appeared, the club actually released a formal statement making clear 'under the current economic conditions, such a step is not possible for both parties.'

With Ozil earning £350,000-a-week at Arsenal, it was always going to be several bridges too far to get him to the banks of the Bosphorus.

Now a footballer who hasn't kicked a football competitively since July 3 and didn't even make Arsenal's Premier League or Europa League squads this season has been forced to lower his demands.

Reports have suggested that if the Gunners continued to shoulder £68,000-a-week of his pay for the next two years, a deal could be struck and eyelashes have been fluttered in both directions.

In a Twitter Q&A on Monday night, Ozil said he supported Fenerbahce growing up in Germany and said: 'Fenerbahce is like Real Madrid in Spain. The biggest club in the country.'

And Fenerbahce's enormous fanbase was sent into further rapture when he revealed his favourite district of Istanbul was Kadikoy, where their 50,000-capacity Sukru Saracoglu Stadium is located.

Meanwhile, Ozil's agent Erkut Sogut said on beIN Sports Turkey: 'Ozil is not an ordinary Fenerbahce supporter. He's a fanatic. He would only come to Turkey to play for Fenerbahce.'

On the Fenerbahce side, president Ali Koc said the club are 'closer than ever before' to signing Ozil.

So all the signs points to Ozil joining his beloved club and he would come into a side performing well under coach Erol Bulut, who was appointed at the start of the season.

Fenerbahce have won their last four matches and have lost only four times all season, including a 4-3 thriller to Besiktas at the end of November. They notably thrashed defending champions Istanbul Basaksehir 4-1 just before Christmas.

A cosmopolitan squad contains a number of names familiar to followers of English football.

The erstwhile Newcastle United player Papiss Cisse, now 35, plays mainly from the bench but has scored three times so far this season.

Winger Enner Valencia, once of West Ham and Everton, plays more frequently from the start but the Ecuadorian's season has been disrupted by Covid and injury.

Also in the squad is forward Mbwana Samatta, on loan from Aston Villa, though his season has also been held up by a knee injury.

Bulut favours a 4-2-3-1 in most games and so Ozil is most likely to dislodge Mert Hakan Yandas or Dimitris Pelkas from the No 10 role.

It seems especially harsh on Greece international attacking midfielder Pelkas, who only arrived from PAOK in October, and has scored seven goals and set up another five so far.

But everyone at Fenerbahce will accommodate Ozil if the move goes through. For so long has he been maligned at Arsenal, we have forgotten all about his qualities.

Even at 32, Ozil will surely be able to elevate Fenerbahce's play and win them the title.

Manager Bulut was part of the Fenerbahce team that famously won 1-0 at Old Trafford in 1996, inflicting Manchester United's first-ever home defeat in Europe, and will strive to restore those glory years.

Rather like United, Fenerbahce believe they have been waiting far too long to be crowned champions of their country.

Signing Ozil will be seismic for the club and Turkish football as a whole, a move requiring an unprecedented financial commitment.

But they can be reassured that Ozil will finally be playing with his heart for a club he has genuine affection for rather than the size of his pay packet.