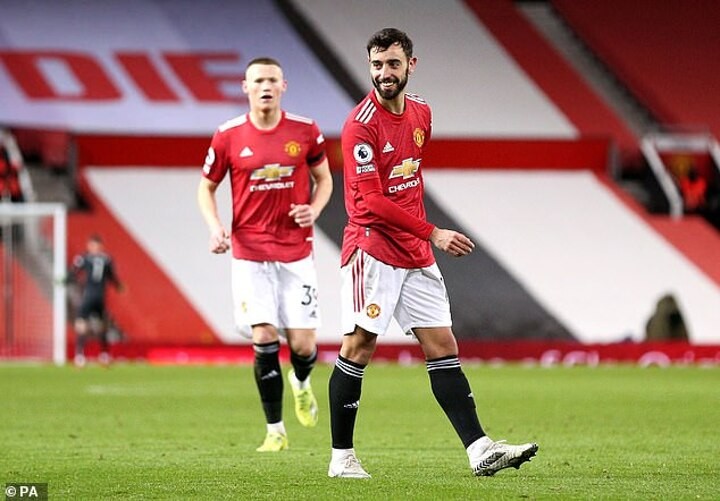 There was an unwritten rule in Manchester City’s dressing room during my career when it came to picking the PFA Player of the Year.

If someone from Manchester United was in the running but Liverpool or Chelsea had candidates who had performed to a similarly high level, your vote would go to Stamford Bridge or Anfield. Politics such as this goes on in every dressing room across the land: you don’t vote for a rival.

Of course, there were exceptions when you had to acknowledge brilliance. I remember that I did vote for Cristiano Ronaldo in 2007 and Wayne Rooney in 2010 — to do anything else after such outstanding campaigns would have been ridiculous.

Had I been in that same dressing room now, I would have found myself going against the unwritten rule again. There are many fine candidates this year, not least Ruben Dias and Ilkay Gundogan, but the outstanding footballer of 2020-21 is Bruno Fernandes.

His numbers at this stage of the campaign are frightening for a midfielder: 15 goals, 10 assists. Involved in a goal, either scoring or setting up, every 84 minutes. Fernandes has created 71 chances and I don’t believe United would be in the top four without him.

The real mark of an outstanding player is what he does to others in the team and Fernandes has dragged improvement out of those around him. He also has a reputation now. If I’m not watching United and I hear they have scored, I have one thought: it’s Bruno.

He is having an impact similar to the one Yaya Toure had in 2013-14 for City. Luis Suarez won the award that season but it gets overlooked how well Yaya performed.

Suarez was incredible in that campaign, with 31 goals and 12 assists for Liverpool, but Yaya was a force of nature.

He was the reason City won the title, with 20 goals, nine assists and 90 per cent of his 2,502 passes finding their target.

I don’t think we appreciate how good Yaya was. When he joined from Barcelona in 2010, I knew we were getting someone who could take care of the ball but I had him down as being a more destructive, athletic player.

It was only when you saw him in training you realised how graceful and technical he was; if him and David Silva were on the same team in a six-a-side match, it wasn’t fair. They would run rings around you with their touch and passing.

You couldn’t stop Yaya either, he was so strong. He was at his peak in 2013-14 and I’d say he felt his achievements were downplayed.

He scored six free-kicks that season, all of them beauties. He couldn’t get close to hitting the target when he practised in training but he said to us: ‘Don’t worry, I’ll do it when it matters.’

The only consolation Yaya had was that he finished by collecting the Premier League title for the second time. Individual awards are wonderful but the big trophies are the ones you dream about and he retired with 18 winners’ medals.

So far, Fernandes has won four trophies. He didn’t move to Old Trafford dreaming of being named Player of the Year, he came to England to compete for the best prizes and he is the one who will be the catalyst if United achieve something special.

Apart from his numbers, there are other things that really stand out. He’s got an old-school mentality, he shouts at his team-mates if he doesn’t get the right pass or they don’t do what he wants them to do. The way he plays, you can see how much he wants to win. He’s not someone who is content when things have been going well, he’s looking for more.

A couple of weeks ago, I asked why United had settled for second best in the Premier League title race but Fernandes was exempt from that criticism.

That’s what sets him apart. I know Dias has made an incredible impact for City and he has exceeded my expectations.

He has made a similar impact in Manchester as Virgil van Dijk did for Liverpool but to be mentioned in the same breath as Van Dijk, Dias has to do it consistently for a few seasons.

Gundogan has shown a side to his game that I always felt was there, in terms of scoring goals. He has been selfless for this City, team, allowing other players to take the headlines in the past.

But now he has stepped forward and he is a big reason why Pep Guardiola’s side are on course to be champions.

If Gundogan and Dias follow in Toure’s footsteps and finish the season in first place, I doubt they will spend too much time worrying about not being named Player of the Year.

Equally, if Fernandes does get the recognition he deserves but no silverware follows for United, how will he feel?

Fernandes deserves to be winning trophies the way he is playing. Games against AC Milan in the Europa League and Leicester in the FA Cup provide a path to that target. Nobody will be trying harder than United’s No 18 to make it happen.

It’s six weeks since Wayne Rooney stopped being a footballer and started calling himself a manager.

There have been a couple of little bumps but, in those six weeks, Derby’s results have dramatically improved and started to banish the idea they would be relegated. He’s had a massive impact and I’m not at all surprised.

During England training sessions, Wayne would always be asking questions of manager Steve McClaren, trying to pick up bits of information. He was preparing to be a manager for a long time and was desperate for the opportunity.

When you add in his reputation, his aura and the fact he knows what players want, he’s won half the early battle.

Wayne is a genuinely nice guy and his man-management will be a big strength. Players are going to want to play for him. There will be more good days in the future.

Micah's man of the week

How many clubs will have watched Leeds this season and kicked themselves over Raphinha? He was everywhere during Tuesday’s win over Southampton.

What a signing he has turned out to be for £18 million — it’s one of the coups of the season.

Marcelo Bielsa has transformed a team of very good players and made them a genuine Premier League outfit, one that plays attractive and exciting football. But Raphinha adds star quality.

He is 24 and has the potential to be a next-level talent.