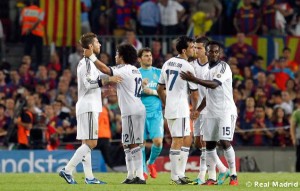 Midfielder Michael Essien has become the first Ghanaian to play in the world's biggest club game, the Spanish El Clasico.

The Real Madrid was a second-half substitute as they held Barcelona to a 2-2 draw at the Nou Camp.

Essien came on for Di Maria with just four minutes remaining to make him the first Ghanaian to play in the El Classico with millions watching across the globe.

But it was not the first time Essien has played against Barcelona.

He played for Chelsea in many matches when they faced the Catalan giants in the Champions League.

Essien joined Real Madrid at the end of the transfer window in August on loan from Chelsea.